Pebble founder launches Beeper, a universal chat app that works with iMessage and others – TechCrunch

Pebble founder launches Beeper, a universal chat app that works with iMessage and others – TechCrunch

Decades ago, a software program called Trillian introduced a way for internet users to interact with multiple IM networks, like ICQ, AIM and MSN Messenger, in a single window. Now, Pebble founder and Y Combinator Partner Eric Migicovsky is revisiting this concept, but this time with a focus on centralizing access to modern-day chat applications. Through the newly launched app, Beeper, users can connect with 15 different messaging services, including WhatsApp, Telegram, Signal, Instagram and Twitter DMs, Messenger, Skype, Hangouts and others — even, through a few tricks, iMessage.

Migicovsky says he first came up with the idea for a universal chat app while working on the smartwatch pioneer Pebble, before its acquisition by Fitbit.

“We really wanted Pebble to be able to send iMessages, but we could never figure out a way to do it because there’s no API for iMessage,” he explains. But the idea for Beeper came to a head two years ago when he learned about a protocol called Matrix. “All of Beeper is built on top of Matrix, which is this open-source federated, encrypted messaging protocol,” he says.

Migicovsky describes Matrix as mostly “a hacker thing,” but believes it’s starting to take off among developers. Basically, Matrix offers an API that allows developers to connect with other chat networks using a “bridge,” which relays the messages back and forth from one side to another.

“When I learned about that, I was like ‘Hey, we could build Trillion using Matrix,’” Migicovsky says. 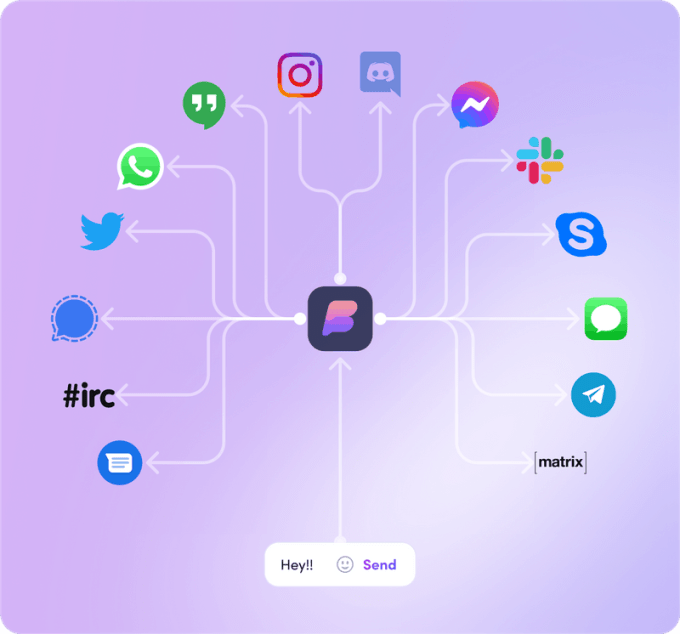 Migicovsky began to work on Beeper as a side project with Tulir Asokan, a Matrix contributor he met in a Matrix chat room.

To make Beeper (previously called Nova) work with all the different chat apps, they had to build these connecting “bridges.” This code is also open-sourced and available at Gitlab.com/Nova.

“We think it’s really important for people to know what code they’re running — so it’s all open source. People can inspect it,” notes Migicovsky.

Because of this, people also don’t have to pay Beeper the $10 per month it’s charging for access to the service. If they know what they’re doing, they can just run the bridges on their own servers, if they choose.

While every messaging platform has its own unique setup in Beeper, making iMessage work was the most complicated. And the workaround here is somewhat involved, to put it mildly.

Beeper actually ships its users an old, jailbroken iPhone (iPhone 4S, because it’s cheap) to serve as the bridge. The code installed on the iPhone reads and writes to the database file where your iMessages are stored. The iPhone encrypts the messages with your own private key and then sends it over the Beeper network. This means Beeper, the company, can’t read your messages, Migicovsky says.

This process allows Android, Windows and Linux users to use iMessage. But it’s not the only way Beeper can make iMessages work. Mac users with an always-on device can instead choose to install a Beeper Mac app to work as the bridge.

Migicovsky says he’s not afraid of any shutdown attempts or litigation by Apple.

“What are they going to do?,” he asks, rhetorically.

Even if Apple somehow stopped Beeper from providing jailbroken iPhones to users, the company could redirect their customers to acquire their own old iPhones from Craigslist instead. Meanwhile, the software itself is open source and running on an iPhone at the user’s house — so Beeper isn’t really “hacking” into iMessage itself.

“I think given the current climate of messaging freedom — I think it would be insane for Apple to start picking a fight with their own users,” Migicovsky adds. Plus, he notes that the European Commission is working on draft legislation similar to the GDPR that mandates all companies to open up messaging for other platforms.

“When that passes, they legally won’t be able to block people from doing something like Beeper,” Migicovsky notes.

Beeper, of course, is not the first or only startup focused on trying to break through the iMessage lockdown. Other apps have tried to do this in the past, like AirMessage or weMessage, for example. They have only seen limited adoption, however. And Beeper is not the only startup to try to centralize chat applications, either — Texts.com is developing a similar system.

That said, signups for Beeper were bigger than Migicovsky expected, he says, though declined to share the details. He says Beeper is slowly onboarding users as a result. (For that reason, we have not been able to actually use Beeper. We can’t speak to its claims or usability.)

Despite the competition, where Beeper may have an advantage is in understanding what makes for a great user experience. Pebble, after all, sold over 2 million watches.

Longer term, Migicovsky envisions a platform that could do more than just text and share media, stickers and emoji, like other chat apps. Instead, the team is building a platform that would allow people to build more tools and apps on top of Beeper — a system sort of like Gmail’s plugins. For example, there could be tools that would let users schedule calendar events from within their chats. Or perhaps a tool could help you see all the most recent messages you’ve had with a particular user across different platforms, like Clearbit.

Migicovsky declined also to detail how the work on Beeper is being financed but when asked if Beeper could be the next step for him — as in, a new company to work on — he replied, “possibly.”

“I’m enjoying my time at YC. It is fantastic. I was just inspired by all the companies that I work with to do this. Part of being VC is talking to all these founders who are building cool stuff and launching it. And I got a little bit jealous,” he admits.