No-code — software that lets you accomplish tasks that previously required coding skills — is an increasingly hot space, even if the basic premise has been promised and not fully realised for many years. Related to this are companies like Airtable, which attempt to make building relational databases and interrogating them as easy as creating a spreadsheet. Now Softr, a startup out of Berlin, wants to push the no-code concept further by making it easy to build websites on top of Airtable without the need to write code.

Recently soft launched on Product Hunt, today the young company is disclosing $2.2 million in seed funding, having previously been bootstrapped by its two Armenian founders, CEO Mariam Hakobyan and CTO Artur Mkrtchyan. Leading the round is Atlantic Labs, along with Philipp Moehring (Tiny.VC) and founders from GitHub, SumUp, Zeitgold, EyeEm and Rows.

Started in 2019, Softr has built a no-code platform to enable anybody to build websites and web apps based on data housed in Airtable. The idea is to let Airtable do the database grunt work, combined with Softr’s relatively flexible but template-driven approach to website and web app creation.

Softr’s Hakobyan explains that out of the box the startup offers templates for anything from a simple marketing website to web apps for an e-commerce store, job board, marketplace and more. Those applications can include functionality like user authentication, gated content, payments, upvoting, and commenting etc.

“Softr has zero learning curve and can literally be used by anyone without a tech background, as it abstracts away all the technical aspects and focuses the user on product building and content, rather than technology,” she explains. “Softr uses Airtable as the database, as it makes it easy creating and sharing relational databases, without having to learn SQL or scripting. Airtable has gotten pretty popular in the last few years and is used not only by individuals but also Fortune 500 companies”. 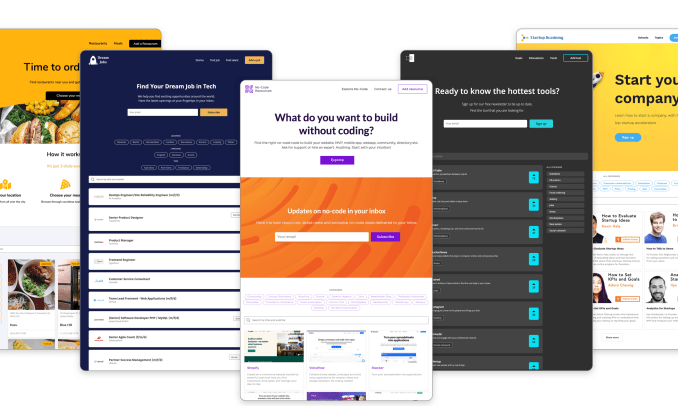 To that end, Hakobyan says Softr’s magic is that it uses the concept of “pre-built building blocks” (listings, user accounts, payments etc) and business logic to handle most of the heavy lifting on behalf of the website creator. “When using blocks and templates.. ., 70% of the work is already done for the user,” she explains.

Softr is currently used by “several thousands of makers and startups”. Examples of applications that customers have built on Softr include a language learning school with membership, a baby-sitters booking marketplace, and a community with gated content and online courses.

Armed with capital, Softr plans to expand its customer base to non-tech functions of SMBs to help them build internal tooling, such as employee directories, product inventories, real estate listings etc., and to automate manual processes.