Could This Montessori Learning Company Be the…

As was widely expected, the EU Council (made up of representatives of the EU member states) has officially rubber stamped the EU Copyright Directive that the EU Parliament passed a few weeks back. There had been some talk of various countries, such as Sweden, Germany and the UK possibly changing their vote. Sweden, in the end, actually did do so, but to stop the Directive, it was necessary for the UK or Germany to do so as well, and they did not.

There is some irony in the UK (still a part of the EU for the moment) voting to approve this. After the EU Parliament passed the Directive, the UK’s Boris Johnson (who is somewhat famously buffoonish) tweeted about how this was yet another reason for the UK to leave the EU. 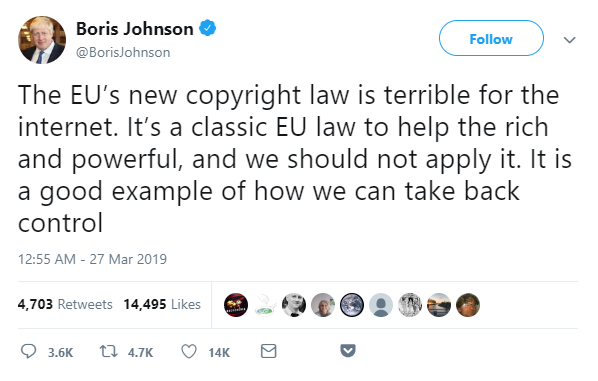 If you can’t read that, it says:

The EU’s new copyright law is terrible for the internet. It’s a classic EU law to help the rich and powerful, and we should not apply it. It is a good example of how we can take back control.

The only problem with this is that Boris’ own Tory government has been strongly supporting the law all along and, of course, voted happily for it today. Boris Johnson being full of shit is perhaps not newsworthy, but it’s at least worth pointing out just how silly the whole thing has become.

A few countries besides Sweden also voted against the law: Italy, Finland, Luxembourg and the Netherlands. Belgium, Estonia and Slovenia abstained from voting. So, basically most of the larger countries voted for it.

And, now, the big question is how will the various countries implement the law. Technically, they have two years to do so, and this should be watched closely. France’s culture minister has already said he’s hopeful that France will implement the law by the summertime, so that country may be the first. That would be interesting, considering that France has also been the most committed to the absolute worst ideas around the law. France may then “set the standard” for how to implement Articles 11 and 13 in a manner that some smaller countries may mimic. Of course, if France actually follows through on the dumbest of all implementations (a decent possibility), it will also make for an interesting test case to see if companies simply decide to block services in France.

Either way, once the laws are implemented, we expect there will be legal challenges to them, and then we’ll have years of court battles to fight, while the EU continues to wonder why successful internet companies don’t seem to ever come from the EU…