Riot Games will invest $10 million in… 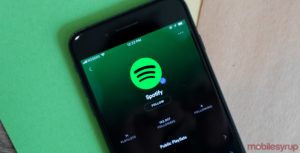 Spotify has more than 100 million Premium subscribers, the company revealed on Monday in its Q1 2019 earnings report.

Premium subscribers make up almost half of Spotify’s approximately 217 million user base, with 117 million users taking advantage of the service via its free, ad-supported tier. Paid subscribers increased by 32 percent year over year compared to the same period last year.

Despite the significant milestone, Spotify reports it wasn’t profitable this past quarter; the company lost €142 million (approximately $213 million CAD).

What’s more, by Spotify’s own admission, much of its recent growth is thanks to aggressive promotions in the U.S. and Canada. Specifically, the company highlighted the Google Home Mini promotion it launched in Canada and other markets earlier in the year. Canadian Premium subscribers have until May 7th to get a free Google Home mini.

Delivery workers are keeping California fed. They say no one's keeping them safe