Microsoft going all in on Android buying… 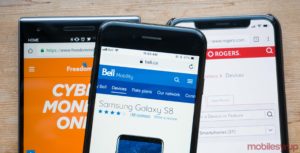 This past week, Rogers announced its Infinite Plans starting at $75 CAD for 10GB of high-speed data, with additional unlimited data at a throttled speed of 256Kbps. Other Canadian carriers quickly followed suit with their own promotional plans. Telus initially offered a plan with a flat 15GB for $75, but with no unlimited data.

Next up, Bell launched plans matching Rogers’ offering, and then released additional plans to match Telus’ deal as well. Finally, Telus released a ‘no overage’ plan, including the same 10GB of high-speed data for $75, along with faster throttled unlimited data speed at 512Kbps. Smaller carriers such as Eastlink and SaskTel were not far behind in launching or promoting their own versions of unlimited data plans as well.

The team talks about what these plans mean for Canadian consumers. They also take a look back at the last time Canada’s largest carriers launched major promotional plans. And finally, the SyrupCast team discusses whether these plans will help or hurt the carriers offering them.

Tune in to hear the SyrupCast team’s thoughts.

Do you have questions, comments, thoughts, or anything you would like addressed on the podcast? Send us an email to podcast@mobilesyrup.com. If you’re feeling extra adventurous, send us a voice recording of your question or comment and you may end up featured in a future episode!

Igor gives his shoutout to Kawhi Leonard. Shruti sends a shoutout to the Raptors and to Christine. Jon shouts out Bungie. Finally, Christine gives her shoutout to Marc Gasol.

The post SyrupCast Podcast Ep. 201: Everything you need to know about Canadian unlimited data plans appeared first on MobileSyrup.