Car sales have plunged during the coronavirus,… 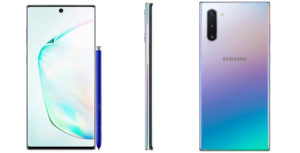 Here’s a breakdown of almost every smartphone leak from the last few days.

Renders of the Samsung Galaxy Note 10 and the Note 10 Plus have surfaced online. The images show off the smartphone’s black and silver colour variants. There doesn’t seem to very many differences between the handsets, except the Note 10 Plus includes a time of flight sensor on the rear and a 6.75-inch display compared the smaller handset’s 6.3-inch screen.

Both will feature an ‘Infinity-O display’ with the camera in the centre, like a cyclops.

Exclusive for https://t.co/Zm9VwYgCdV : After the regular Note10, here's your very first look at the Samsung Galaxy Note 10+/Note10+! Again, got the renders for Silver and Black variant! *Please credit if you use, not using watermarks.* #Samsung #GalaxyNote10Plus #Unpacked pic.twitter.com/5bLtrRd3EN

For more about this Galaxy Note 10 and Note 10+ leak, click here.

Samsung Galaxy Note 10 / Note 10 Plus start at 256GB in Europe, priced at 999 / 1149 Euro respectively. (Disclaimer: based on what retailers are saying, may change depending on markets and other factors) https://t.co/XM5kCHiB4c

Samsung Malaysia teased the outline of the Note 10 in a brief trailer, though the Tweet has since been deleted from Twitter.

It’s unclear what prompted Samsung Malaysia to delete the tweet, whether it was sent out too early or if the teased outline gave credibility to leaked images of the Note 10.

For more on the wired headphones and wireless charging pad, click here.

A recent Samsung Galaxy Note 10 case leak suggests the phone will lack a 3.5mm headphone jack, which backs up the above USB-C in-ear headphones rumour.

A recent rumour suggests the Samsung Galaxy A90 will only get a 5G model. The phone is also set to feature a Qualcomm Snapdragon 855 processor, 4,500mAh battery and 45W fast-charging.

The handsets will reportedly launch in September or October.

Galaxy A90 only has 5G version, Snapdragon 855 processor, is one of the cheapest 5G mobile phones in the second half of the year, will be launched in September or October, with water drop design, FHD + screen, design in general, the main 5G.

For more on the Galaxy A90 leak, click here.

A new render of the Pixel 4 XL has surfaced.

There’s also no display cutout, along with a substantial forehead and chin. Additionally, the report indicates the phone includes downward-facing speakers.

Well, since there seems to be some interest, 1 month after delivering your very first glimpse at the #Pixel4, here comes your very first full look at the #Pixel4XL! 360° video + gorgeous 5K renders + dimensions, on behalf of my Friends @Pricebaba again -> https://t.co/mCQCOp5Pp1 pic.twitter.com/MeAIID0FDz

Similar to the Pixel 3, the phone will reportedly sport a dual camera setup presumably with a wide-angle shooter.

The device lacks a capacitive fingerprint sensor, suggesting the Pixel 4 XL will feature an in-display sensor or that it will solely rely on face-scanning technology like Apple’s latest iPhones.

For more on the Pixel 4 XL leak, click here.

Leaked screen protectors and prototypes suggest that the Mate 30 Pro will sport an eccentric iPhone X-like notch with several cutouts for sensors. Two of the cutouts appear to be for cameras, indicating the phone will feature a dual camera setup.

Alongside a peculiar notch, the phone will feature a ‘waterfall display’ with curves that go nearly to the rear of the phone, creating the illusion of a waterfall.

Full-Display v2.0 leaks more and more, at least two mobile phones will adopt such a curved screen to cover the design on both sides, Samsung is too conservative, has killed this similar project, these innovations will be led by Chinese mobile phones. pic.twitter.com/mp2Y6IZjQ0

For more on this Huawei Mate 30 Pro leak, click here.

Reaching the Quiet Kids in Class