The Re-engineered Beanbag – A Review of…

Your Windows 7 desktop has turned black?… 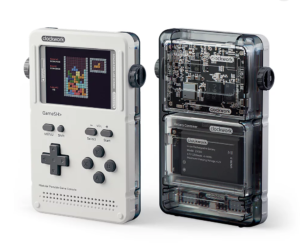 ClockworkPi has launched the GameShell, a DIY kit that lets users create their own Game Boy-like gaming handheld.

The system, which is based on Linux-based open-source software, was crowdfunded on Kickstarter last year. It includes all the necessary components, including a quad-core Cortex A7 motherboard with integrated Wi-Fi, Bluetooth and 1GB of DDR3 RAM. However, you’ll need to assemble it all yourself.

In terms of games, the system includes indie darling Cave Story, as well as a number of built-in emulators to play games for the NES and SNES generations. Meanwhile, the device is designed to be a STEM educational resource for families by offering an easy-to-use coding experience.

The built-in Wi-Fi will allow for games or coding-related software to be downloaded onto the include microSD card. Further, the device supports micro HDMI out, a built-in music player and Bluetooth support for headphones.

The GameShell is currently unavailable on Amazon.ca but it can be bought from ClockworkPi’s website for $139 USD ($185 CAD). The device normally costs $159 USD ($211 CAD).

The post The ClockworkPi GameShell is a DIY Game Boy-like handheld appeared first on MobileSyrup.

Why workload-migration metrics get it wrong