The 5 Stages Of The Blog Sales…

The European Space Agency has suggested that it’s possible to build bases in gigantic tunnels buried beneath the moon’s surface.

It’s issued an open call for ideas on how to ‘design a system to detect, map and explore caves on the Moon’.

The surface of the moon has been explored during manned missions and mapped by satelliles and robotic probes.

But little is known about the ‘lava tubes’ beneath the surface.

It’s believed molten magma once coursed through these tunnels, leaving behind caves which would be ideal places to build lunar settlements.

‘Exploring and mapping these tubes could provide new information about the Moon’s geology, but they could also be an interesting option as long-term shelter for future human visitors to the Moon,’ said Franceso Sauro, Director of ESA’s PANGAEA planetary geology astronaut training scheme.

‘They would shield astronauts from cosmic radiation and micrometeorites and possibly provide access to icy water and other resources trapped underground.’

ESA is now looking for ideas about possible missions to explore and map the caves.

‘Mission concepts may be based on a single rover or a distributed system of satellite, robotic or rover systems that operate together,’ added Loredana Bessone, head of analogue field testing and exploration training at ESA.

‘Either way, we are looking for systems that would land on the lunar surface, identify and access a cave and contribute to the scientific exploration of the Moon.’

In 2024, Nasa is planning to launch a mission to land the first woman on the moon as part of the Artemis lunar exploration program.

It recently revealed details of the spacecraft which will be used during this historic mission.

Nasa announced a ‘major step toward returning astronauts to the surface of the moon’ and issued a call for American companies interested in ‘providing an integrated human landing system to put the first woman and next man on the Moon by 2024’.

The spaceship will have a ‘three-stage human landing system’ which will carry the two space people from an orbiting craft called the Lunar Gateway down onto the moon.

It will then blast off from the lunar surface back to the orbiting satellite, where the astronauts will board an Orion capsule for the 250,000-mile trip back to Earth.

‘The Gateway will be our home base in lunar orbit – it is our command and service module for missions to the surface of the Moon. Using it as a port for the human landing system, its orbit around the Moon will give us access to the entire lunar surface, and a place to refurbish and refuel the landing system,’ said Nasa administrator Jim Bridenstine.

‘This is no small feat, and building a 21st-century landing system takes the best of our government and private-sector teams.’ 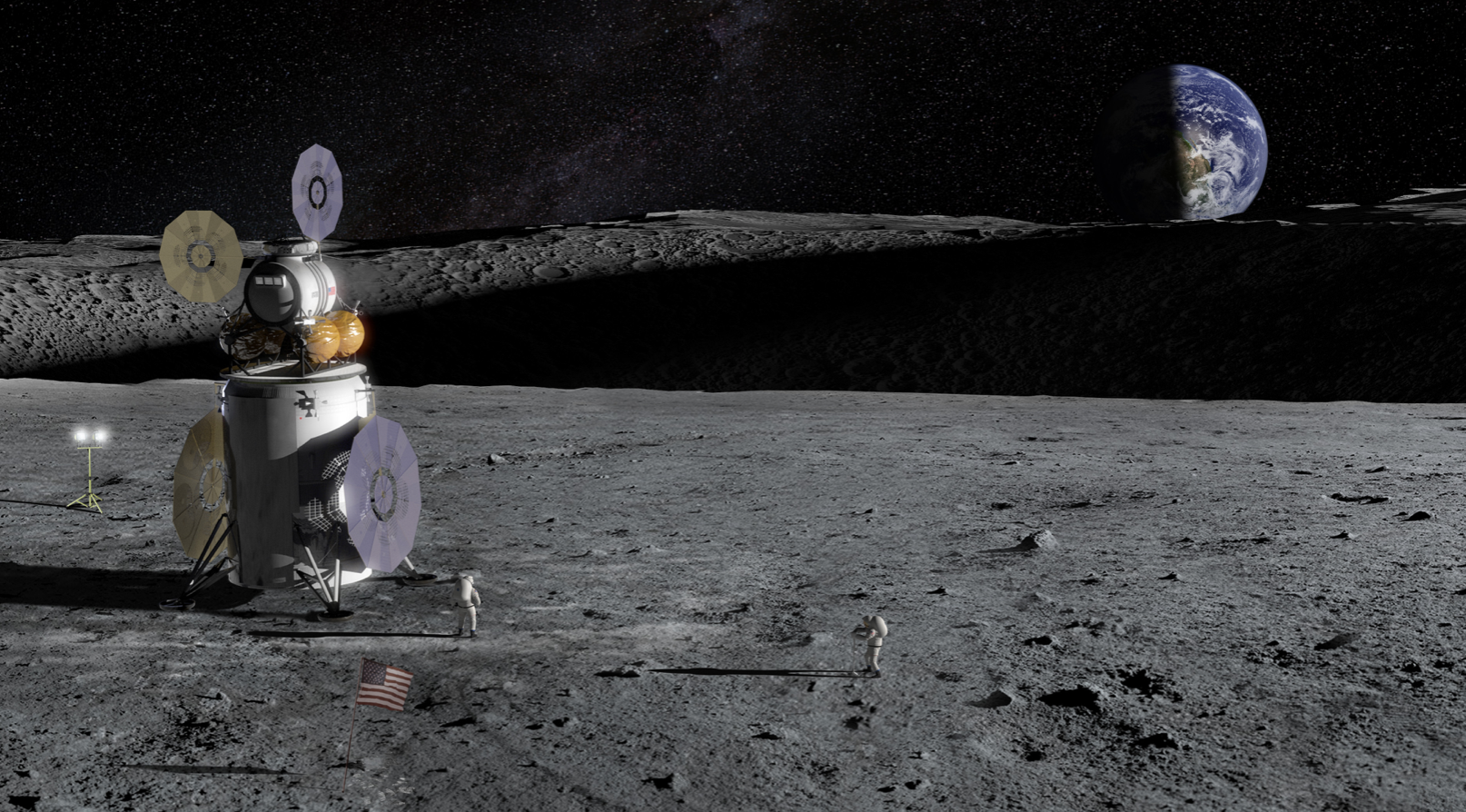 Nasa will now work with private companies to develop the spacecraft.

Chinese scientists recently published new plans for a robot-manned outpost at the opposite end of the moon to Nasa and the European Space Agency, which is also planning its own ‘moon village’ in the lunar South.

Beijing previously announced plans to launch a manned moon mission within the next decade ahead of the building of a north pole base.

‘A robotic scientific research station prototype will be built on the moon,’ Chunlai Li and colleagues wrote in a paper for the journal Science paper.

‘Exploration targets will shift focus from the development of space technology to space science and space applications.’

To view this video please enable JavaScript, and consider upgrading to a web
browser that
supports HTML5
video

The base will ‘lay the foundation for the construction and operation of future Lunar Research Station’.

As it stands, Nasa will beat China to be the next nation to land on the moon – unless dark horse contender Elon Musk sneaks up from behind.

He told Time: ‘ I think we could land on the moon in less than two years.

‘Certainly, with an uncrewed vehicle, I believe we could land on the moon in two years.

‘So then maybe within a year or two of that, we could be sending a crew. I would say four years at the outside.’

Can Google Maps “Stop” An Entire City’s Traffic? We Just Got A Demo