Be Positive! 5 Good News Websites for…

GeekWire’s Alan Boyle reports on a $90 million science project with a diplomatic twist in Jordan, one of the stops on this summer’s Middle East science tour.

ALLAN, Jordan — For Israeli researchers, SESAME could open up a path for finding out exactly what the frankincense mentioned in the Bible was made of.

For Arab researchers, SESAME could reveal how the awe-inspiring structures built thousands of years ago at Jordan’s Petra archaeological site were decorated.

And what’s nearly as awesome as the potential discoveries is the fact that Israelis and Arabs are working together at SESAME to make them.

So what is SESAME?

On the literal level, it’s an acronym for “Synchrotron-light for Experimental Science and Applications in the Middle East.” That reflects the scientific purpose of the facility in Allan, about an hour’s drive from Amman, Jordan’s capital.

Researchers use the 436-foot-round synchrotron ring to whip up electrons and send them speeding through a magnetic obstacle course that generates brilliant flashes of light. When those light beams hit the atoms in samples of material — including bits of frankincense from the place where the Dead Sea Scrolls were found, or rock carvings borrowed from Petra — they can reveal their chemical composition in stunning detail.

But there’s another level on which to see SESAME: Just as synchrotron physics can shed light on materials science, chemistry, biology, archaeology and other fields, SESAME’s international reach can build bridges in a region of the world that sorely needs them.

Synchrotrons may not have the science sex appeal associated with, say, the Large Hadron Collider on the French-Swiss border or the Laser Interferometer Gravitational-wave Observatory. But like LIGO’s detectors in Washington state and Louisiana, synchrotrons are cutting-edge instruments in the Big Science toolkit.

More than 60 synchrotrons are in operation around the world, including a half-dozen in the United States. SESAME is the only one operating in the Middle East.

The Arab-Israeli project was conceived in the 1990s and built up momentum in 2003 with the official groundbreaking in Jordan, which was selected as the host country in part because it had diplomatic relations with all the other founding members — Bahrain, Egypt, Israel, Pakistan, Palestine and Turkey. (Since then, Bahrain has left the consortium, while Cyprus and Iran have joined.)

Construction went forward thanks to $25 million in cash contributions, plus tens of millions of dollars’ worth of hardware donated by the European Union. The organization was modeled after CERN, the particle physics lab that hosts the Large Hadron Collider. Jordan’s contribution of land and equipment brought total estimated investment past the $90 million mark.

The donated equipment turned SESAME into a bargain for its backers. “This is the lowest-cost XAFS beamline ever built,” said Messaoud Harfouche, who’s in charge of the synchrotron’s X-ray beamline.

It took more than a decade to complete construction, due to the ups and downs of Middle East relations, plus a freak snowstorm in 2013 that caused the synchrotron building’s roof to collapse. But the facility finally opened for business in 2017. In February, a 6.48-megawatt solar power plant came online to generate all the electricity SESAME needs.

We got an inside look at the synchrotron facility, courtesy of SESAME’s Italian-born scientific director, Giorgio Paolucci. The tour started at a thick door leading through the walls that shield the synchrotron ring from the outside world. One of the highlights was the chance to climb on the steel catwalks hanging over the ring’s high-voltage equipment. (Don’t panic: The machine was turned off during our visit.) 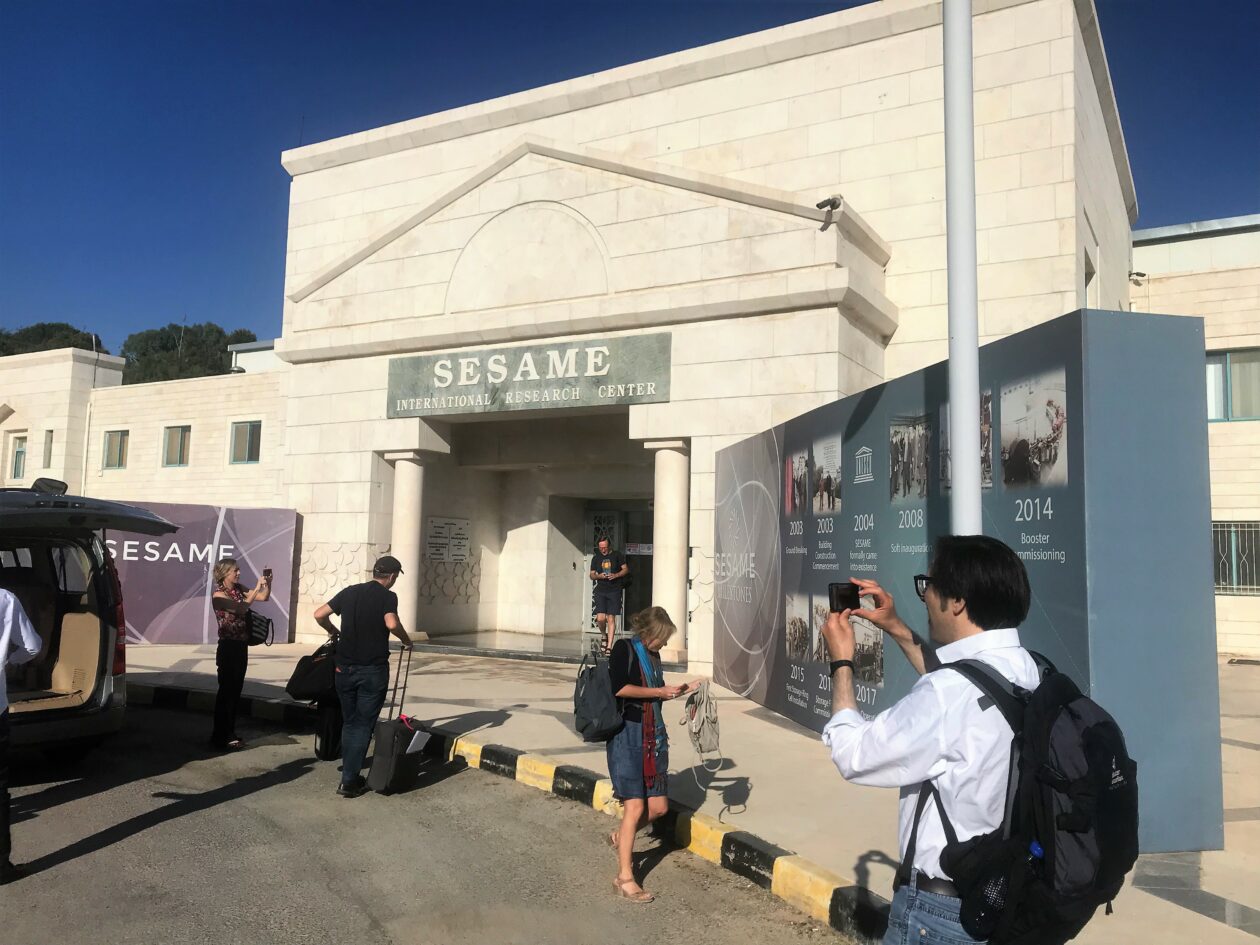 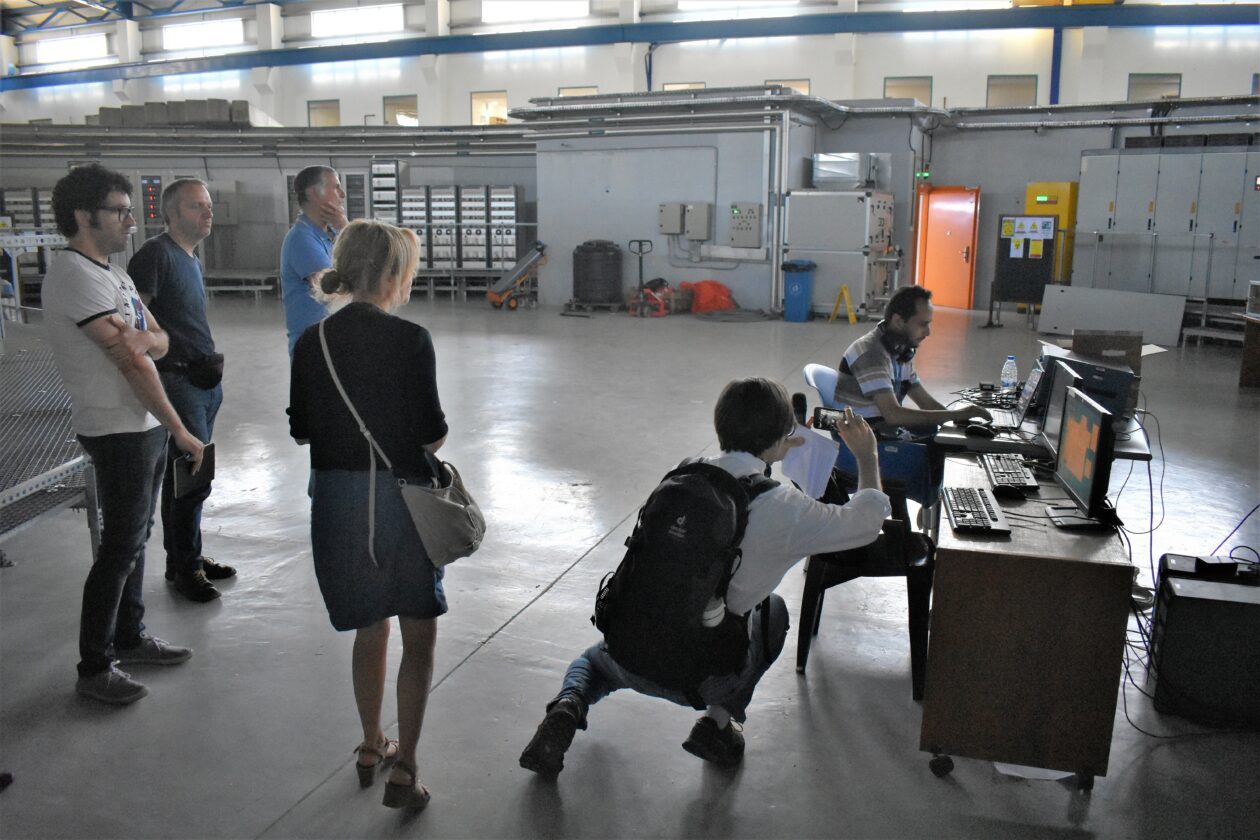 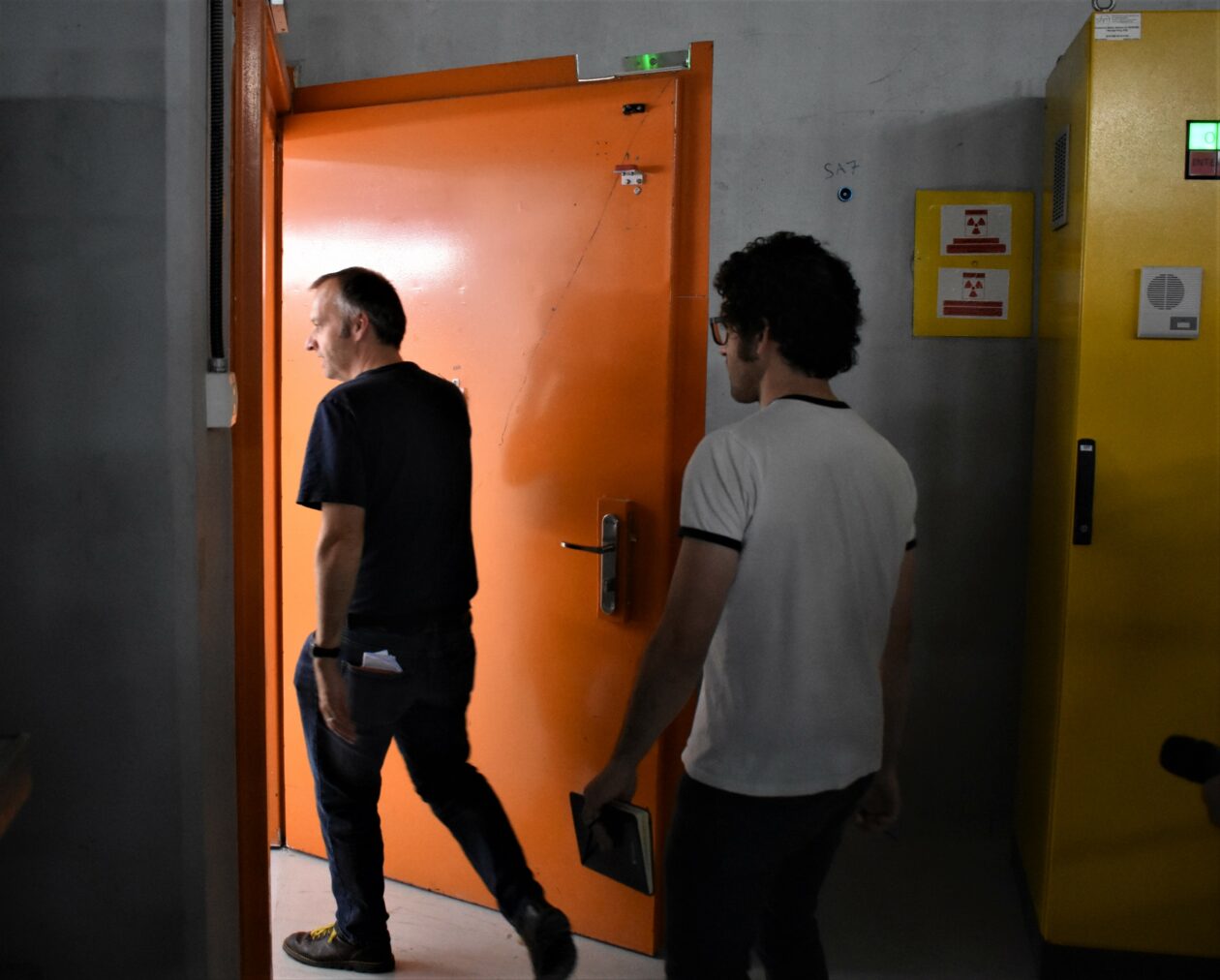 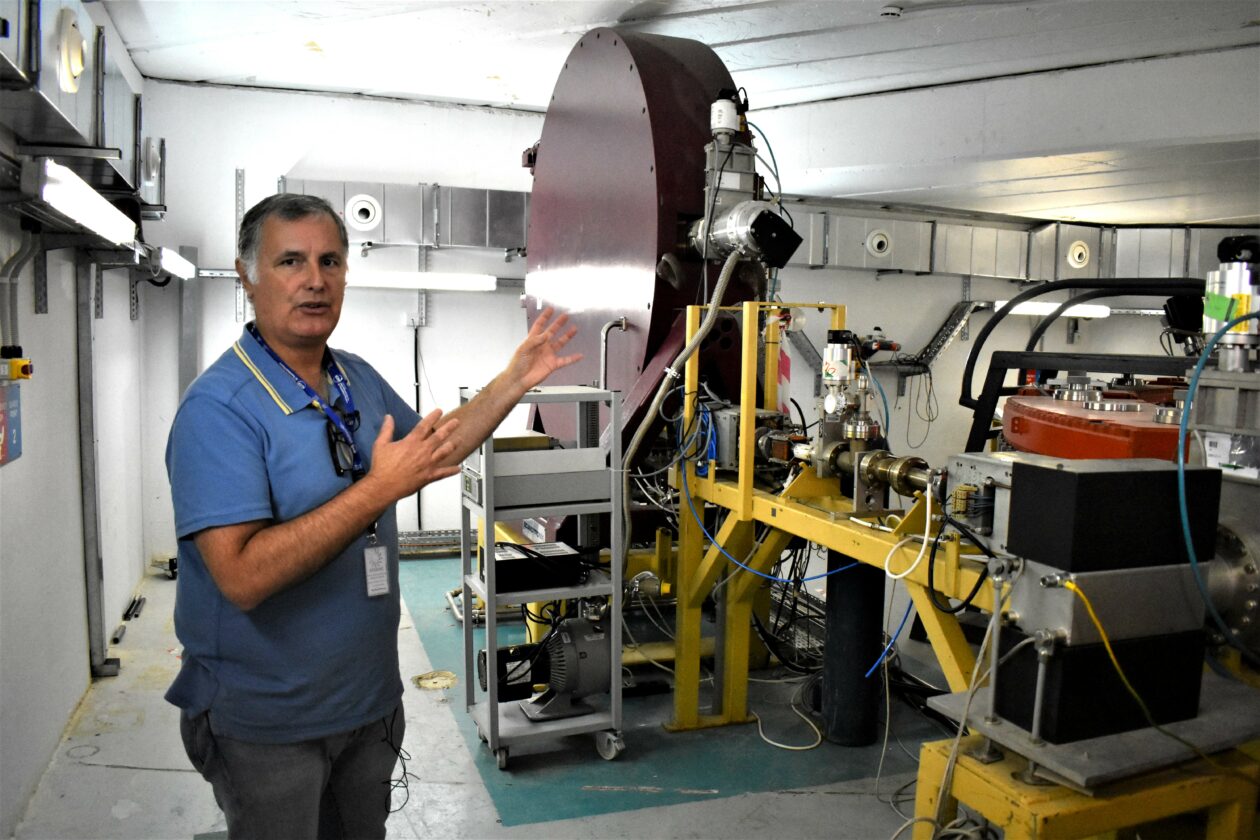 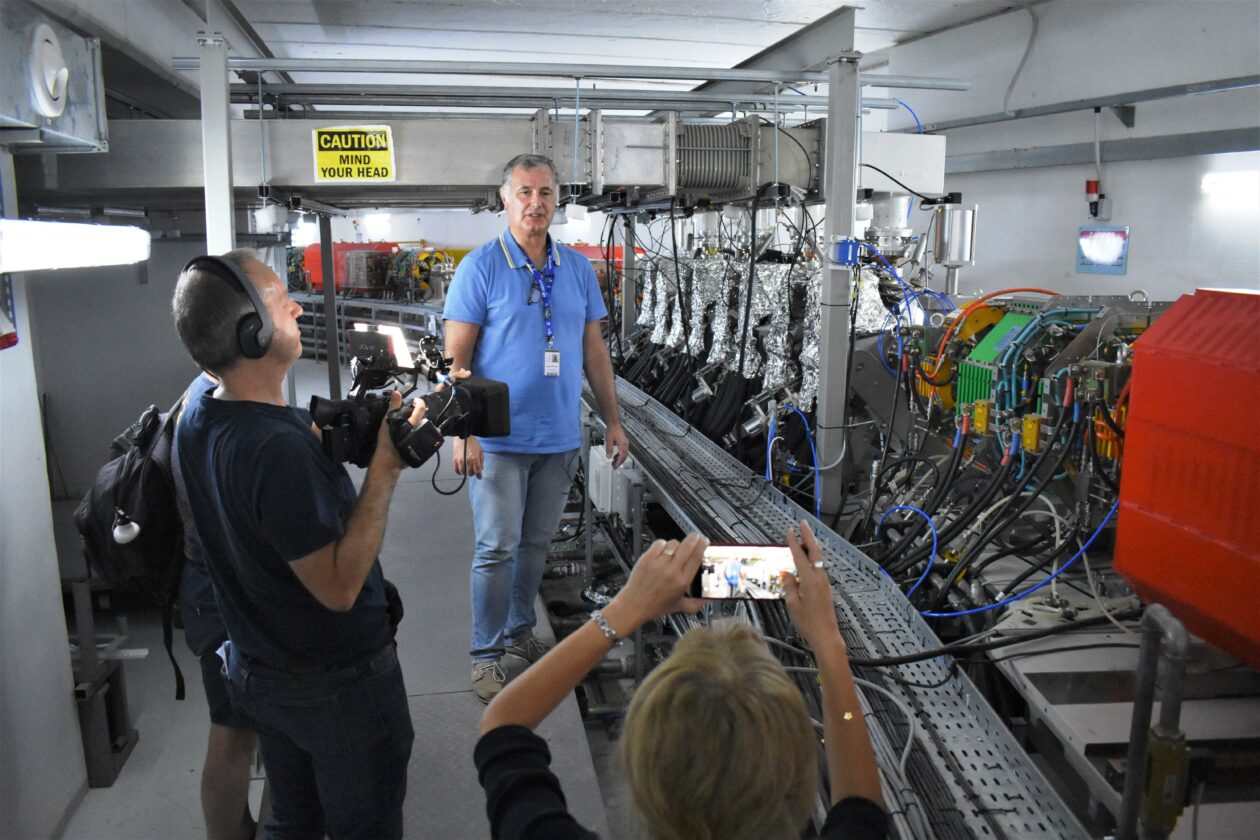 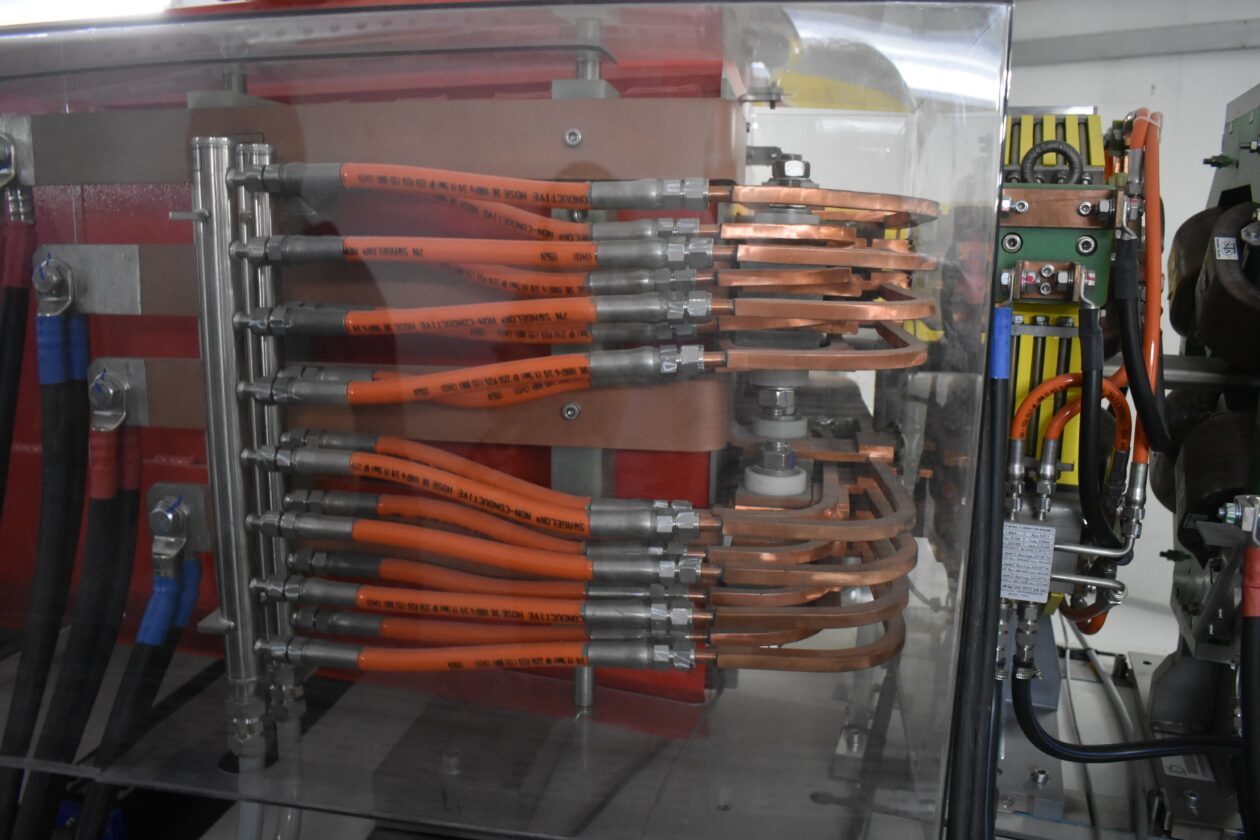 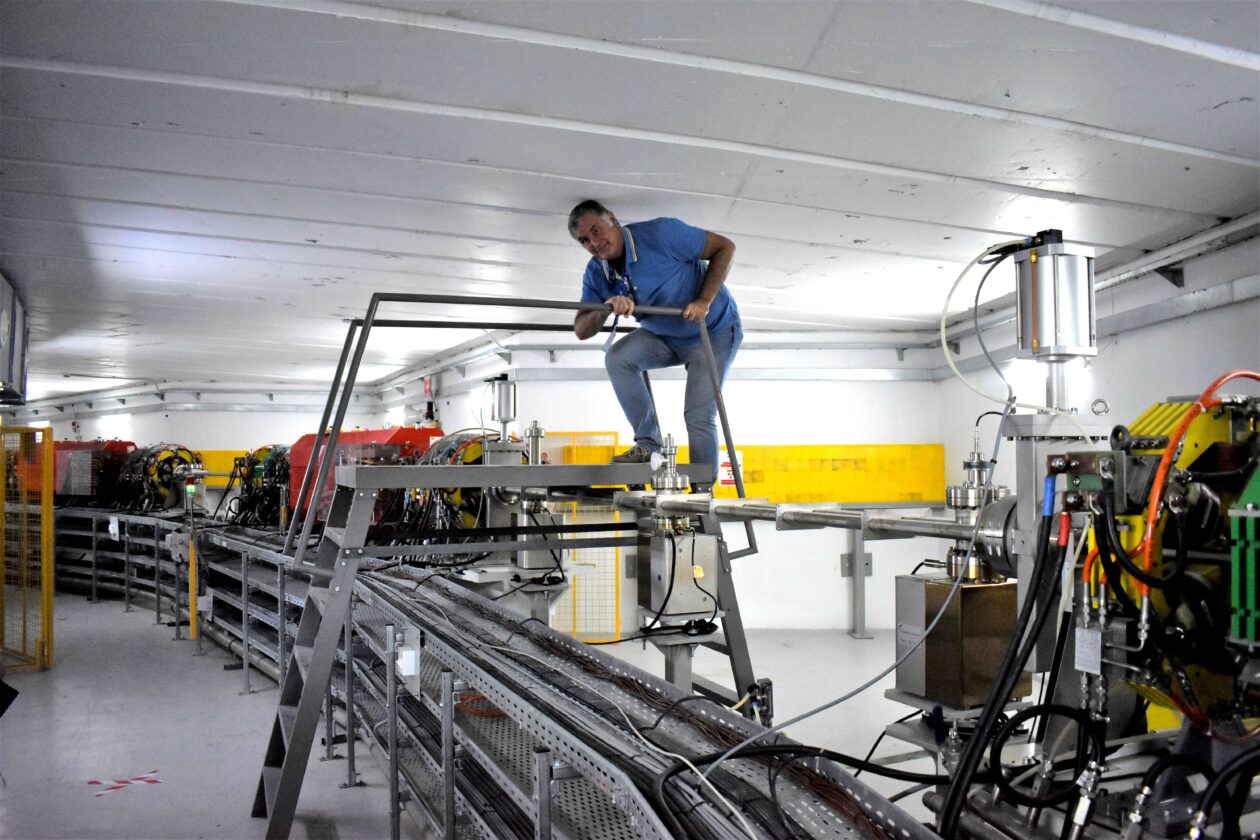 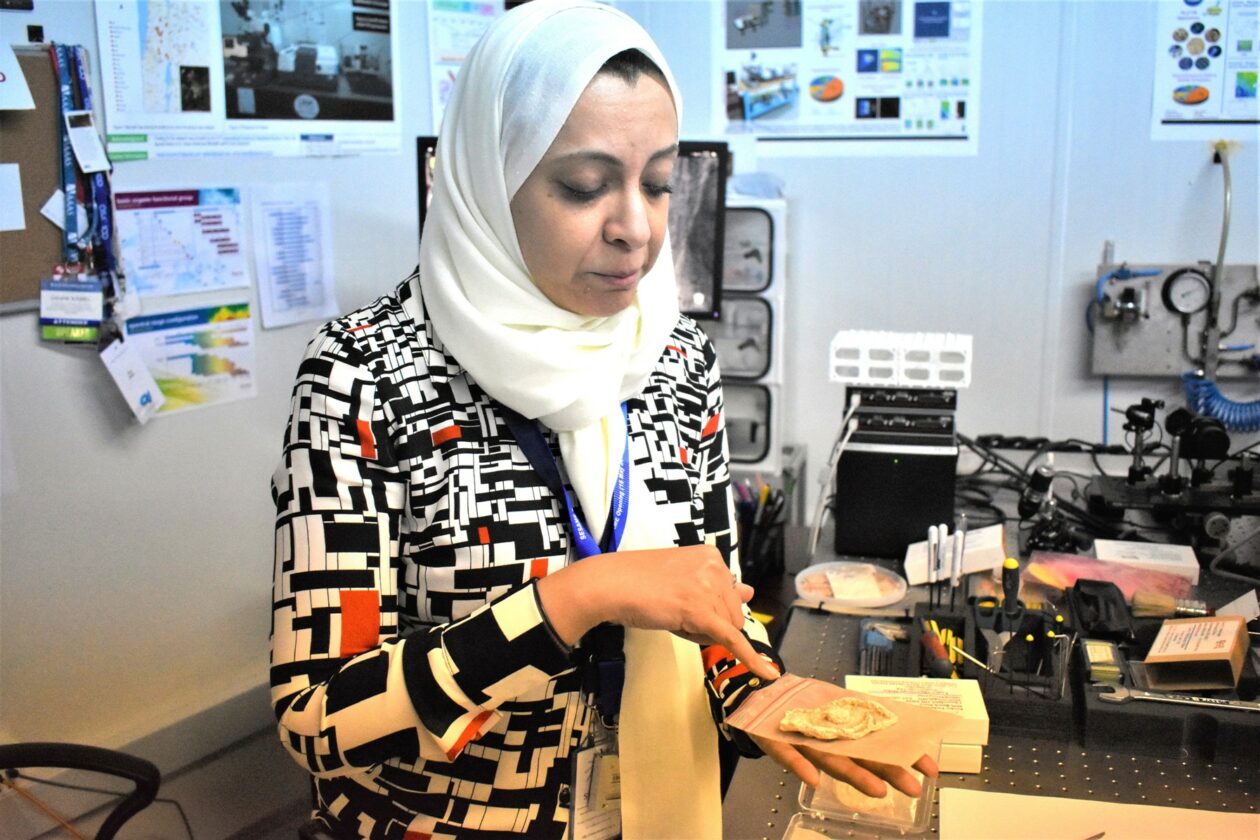 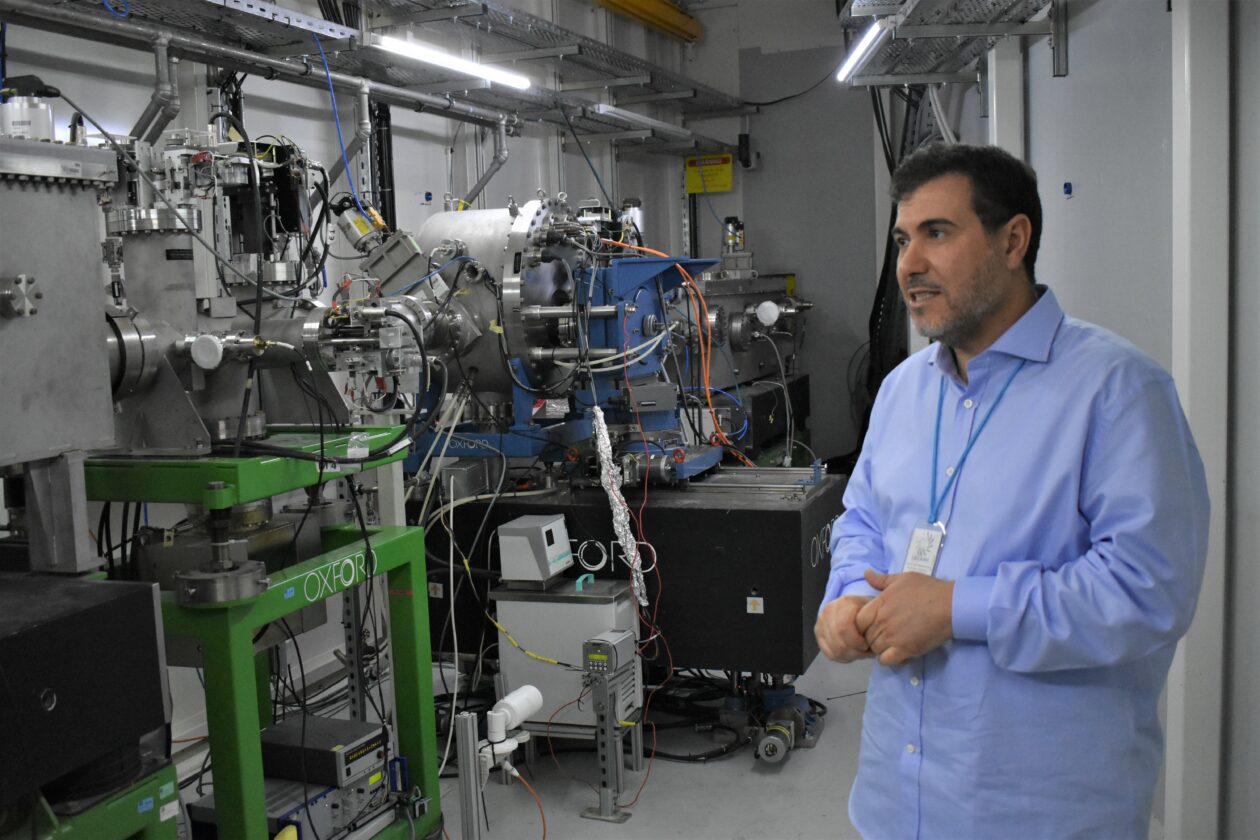 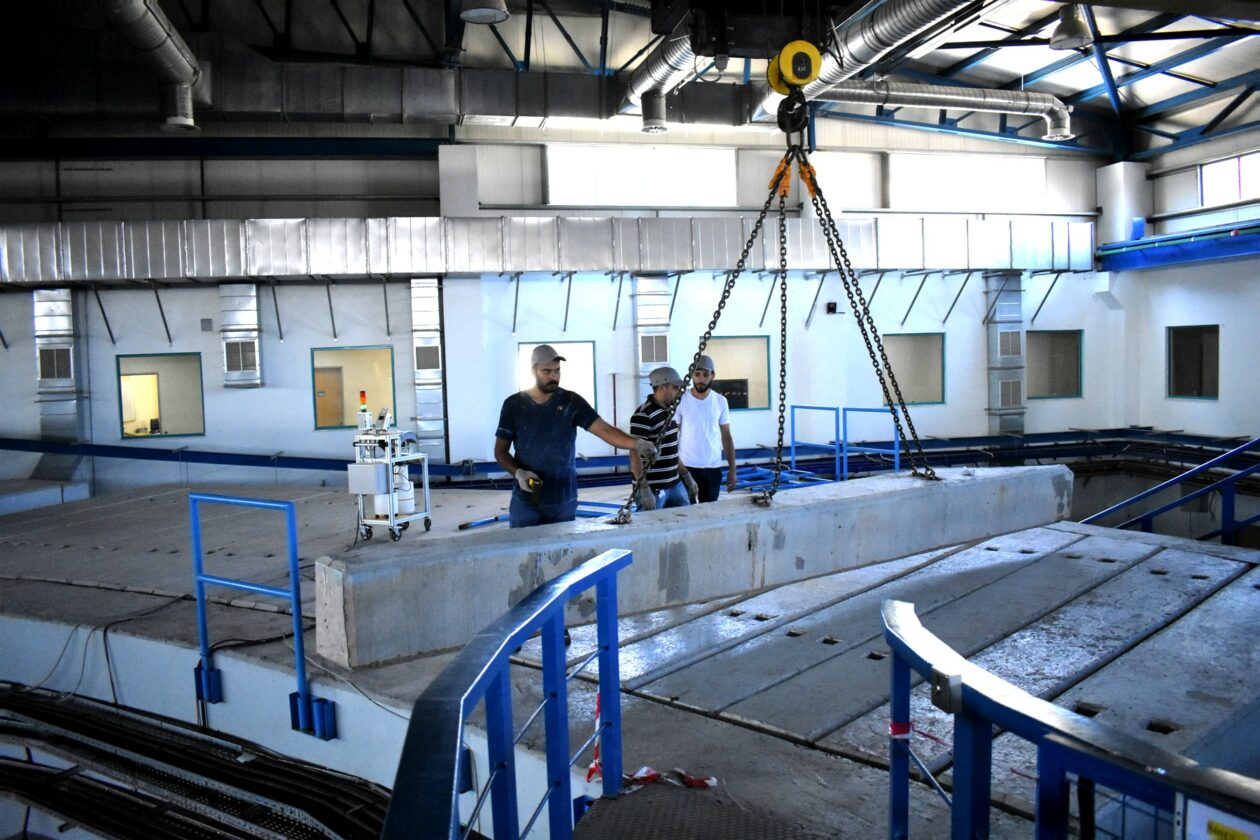 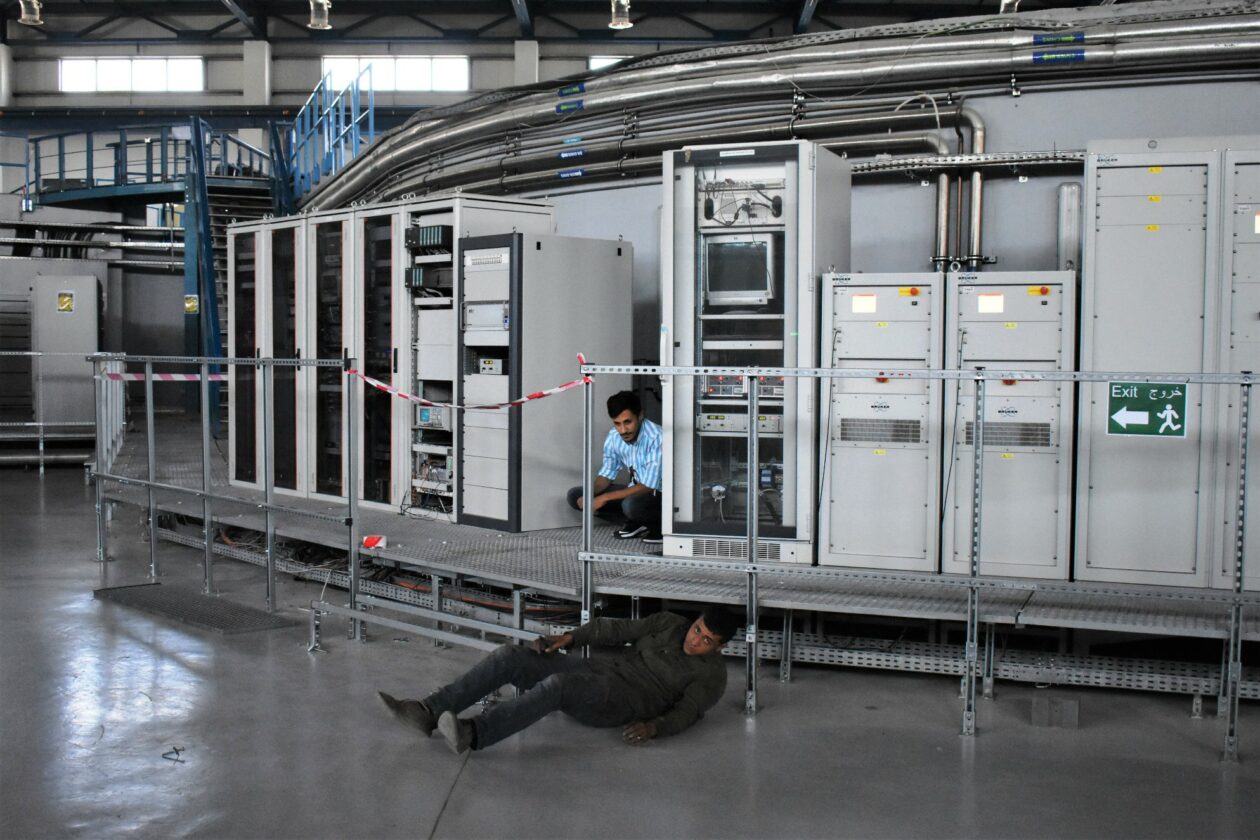 The electrons that fuel the synchrotron’s experments are generated in a 6-foot-wide, disk-shaped piece of equipment known as a microtron, and guided around the ring’s vacuum chamber by sets of high-powered magnets

Other magnets deflect and focus the electrons to produce concentrated beams of light in specific wavelengths. Two beamlines, for X-ray spectroscopy and infrared spectromicroscopy, are already in operation. Five more are planned.

The first peer-reviewed research paper resulting from a SESAME experiment was published in June. In that experiment, Turkish scientists used X-rays to study the molecular structure of a catalyst that holds promise for producing synthetic fuels.

One of the pending projects will look at the best way to preserve a 34 million-year-old turtle bone. Another project involves analyzing samples of Palestinian soil and water to look for signs of environmental contamination.

Still other experiments delve into the ancient mysteries of Middle East:

One of the projects on the to-do list hits close to home for Kamel. “I have an Egyptian mummy in October, I think. It’s the head … They will have to prepare some samples out of it,” she said.

SESAME was inspired by the idea that scientific cooperation could win a foothold even in a part of the world that’s divided along religious and political fault lines.

“This we showed,” said Eliezer Rabinovici, a physicist at the Hebrew University of Jerusalem who was in on SESAME’s founding. “Nobody can take that away from us. And now we are in the second stage. … From now on, I think we are going to be judged by the quality of the science.”

The first Israeli scientist to lead an experiment at SESAME is Brian Rosen, a materials scientist from Tel Aviv University. He’s studying catalysts that could advance the state of the art for energy storage, and SESAME could literally shed light on the molecular properties of those catalysts.

“We built a fuel cell that we can stick under this very bright light bulb,” Rosen said.

Rosen admitted feeling a bit anxious about taking his first-ever trip to an Arab-majority nation.

“I’m a little timid right now, but there have been enough Israelis that have gone to the SESAME site, at least for the planning of the facility, and they come back and they have overwhelmingly positive experiences,” he said. “So I’m looking forward to echoing those experiences, and coming back to Israel and being an advocate in Israel for using the SESAME site.”

Cutting down on academic travel time is a big plus for him. “If I were to go to the north of Israel or the south of Israel, I’d actually be further away from home than SESAME,” he said.

There’s more serious anxiety on the Palestinian side. Some researchers have passed up on the opportunity to take part in research — partly because they can’t afford the expense and hassle, and partly because they’re worried about seeming to collaborate with Israelis.

Natsheh said Palestinian researchers are collaborating with Arab researchers, at SESAME and elsewhere, but education officials have ruled out publishing research papers with Israelis as co-authors. “They call it normalization,” he said. “With this situation, we can’t do it. … We are praying that, really, this situation will improve.”

The situation could go either way in the days, months and years ahead, due to the Middle East’s political headwinds. Maybe there’ll be an Israeli-Palestinian peace settlement (though that currently seems unlikely). Maybe there’ll be an escalation of tensions in the aftermath of this week’s Israeli elections. Maybe there’ll be dramatic developments relating to Iran, which is building its own synchrotron facility with help from European experts.

There’s even a chance that the United States will get more involved in SESAME. The U.S. already has observer status on SESAME’s governing council, and legislation approved by the House would provide $10 million for lab equipment.

The amendment’s sponsor, U.S. Rep. Bill Foster, D-Ill., said he witnessed the power of scientific collaboration during two decades of work as a particle physicist at Fermilab. “I saw firsthand that even when a country’s politicians cannot get along, often their scientists do,” he told his colleagues in a letter seeking their support.

Foster’s amendment faces uncertain prospects in the Senate, but the truth of his statement seems likely to be borne out nevertheless: Despite political setbacks, SESAME’s scientists will soldier on.

“I always say that SESAME is ours. The region is ours, so what our region has is also ours. I think we are the right people to work on what we have,” Kamel said as she stood in front of her beamline. “Science knows no region, but it’s nice to do it here.”

GeekWire aerospace and science editor Alan Boyle traveled to Israel, the West Bank and Jordan in July for a field trip organized through the World Conference of Science Journalists with support from CERN and the European Union’s Open SESAME project.