Last week, we featured Hot Water in the first Winner Spotlight from our public domain game jam, Gaming Like It’s 1924. This week, we’re taking a closer look at the winner of the Best Deep Cut category, reserved for games that used 1924 material that doesn’t appear on the popular lists of works entering the public domain this year. Abelardsnazz snagged the prize this year with the beautiful deck-building card game Legends of Charlemagne.

What’s the “deep cut” that pushed this game into the winner’s circle? A collection of amazing public domain paintings by N. C. Wyeth, primarily from a 1924 edition of Thomas Bulfinch’s book that shares the game’s name, Legends of Charlemagne. This collection of legends, more commonly published today as one third of Bulfinch’s Mythology, was originally written in 1863 and has been republished many times over the years, but the illustrated edition from 1924 contained this complement of then-new artwork that is easily missed by people searching for things that have just entered the public domain. The paintings are prime specimens of the work of Wyeth, who was a prolific and unique artist in the early 20th century with over 3000 paintings to his name, and is known especially for his work for books, magazines and advertising, perhaps most notably the Scribner Classics series. His illustrations for Bulfinch are classic examples of his realist style, and boy do they ever make for some nice looking cards. 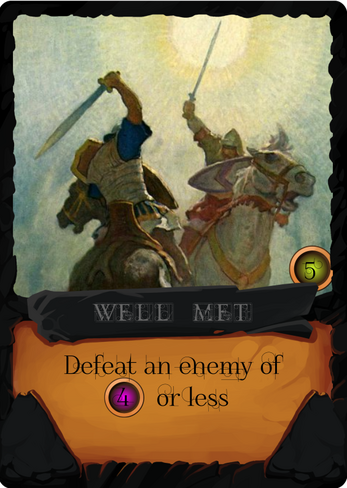 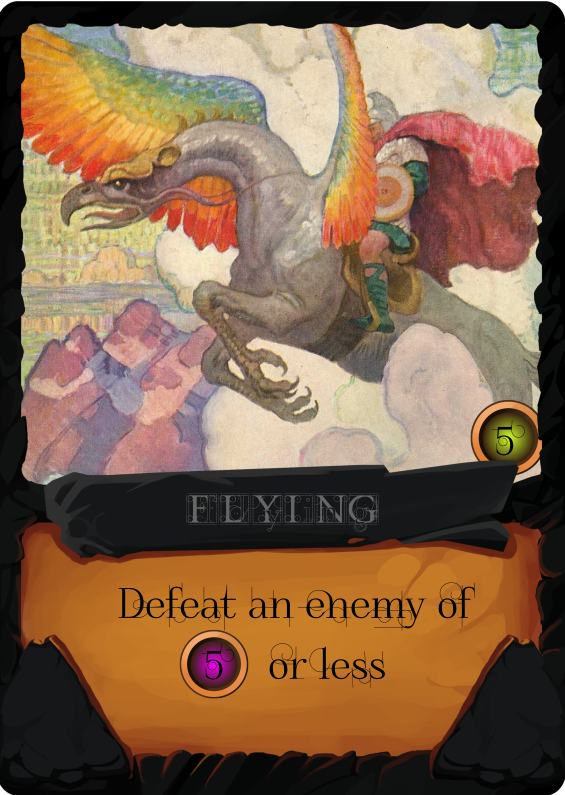 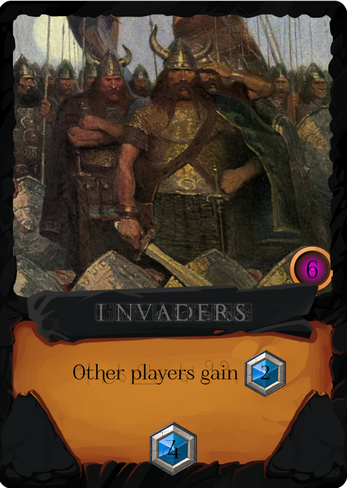 It’s especially cool how this material turns the game into a link in a public domain chain: an adaptation of newly-copyright-free paintings that were themselves originally created to breathe new life into a classic work that was itself outside copyright, which was itself originally based on popular mythology and old stories with their origins lost to history. (Of course, it also really highlights how long copyright terms have gotten, with these paintings made for a then-60-year-old work being protected for nearly a hundred years before entering the public domain last month.) And as you can see, the designer didn’t solely lean on Wyeth’s eye-catching work: the cards themselves are perfectly designed to incorporate the paintings and bolster their aesthetic, resulting in a game that looks so professional and high-quality you can immediately picture it as a printed and packaged product in its current form.

The game itself is a straightforward, well-designed deck builder that will be familiar to a lot of players while still throwing them a few twists and offering plenty of strategic decisions to consider. It’s a prototype and a proof of concept, and as such only has a small set of cards for now: this sort of game notoriously requires extensive playtesting and very careful rules calibration to stay playable and balanced as you add options and variety to the deck. But it’s a sturdy foundation on which to build a truly great game — perhaps drawing on more work by Wyeth, or even other public domain sources. And for that to happen, people need to play it! So grab a copy, admire the art (there are several more fantastic pieces beyond those featured in this post), and go to battle in the age of Charlemagne.

You can download everything you need to play Charlemagne over on Itch, or check out the other submissions in our public domain game jam. And come back next week for the another winner spotlight!

Google revamps its terms of service to give users more clarity

Liberty Mutual highlights the ‘us’ in cybersecurity