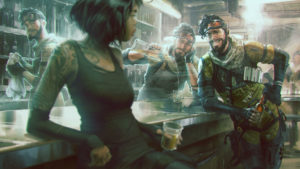 I am beyond excited to announce Gravity Well – a new AAA studio @jonshiring and I are starting in Los Angeles! Its still early days, but if helping start a diverse and remote-native studio sounds interesting you should submit your resume at https://t.co/7mNxGk0XZE

Currently, the team is made up of Shiring and McCoy and will work from home amid the COVID-19 pandemic. Gravity Well will eventually have a team of at most 80-85 operate out of a physical studio in Los Angeles. Shiring said in a blog post that when a team has more than 100 people, everything changes and the organization moves slower.

Additionally, the studio is now taking job applications and is looking only to develop games for next-gen hardware and PCs. So, Gravity Well is aiming to build triple-A titles with a smaller team.

McCoy and Shiring explained the reason for the creation of Gravity Well in a blog post.

“We are starting a studio because of how we want to make games. We want time to iterate on everything and get ideas and feedback from the whole team. We’re building this studio to last for decades, and that doesn’t happen without putting the team first,” McCoy explained. “We take team health as an absolute top priority. That means we are anti-crunch. That means good compensation. That means everyone at Gravity Well has creative freedom, because when someone else makes all of the decisions, work isn’t fun and the end product isn’t as good.”

McCoy and Shiring also worked on Call of Duty: Modern Warfare and Titanfall series. The two have been working on games together for the past 14 years.