Slowly but surely, the digital walls of the world are rising. Earlier this week, India banned dozens of Chinese apps, and is now mounting on the government to ban Huawei — the company recently deemed by the Federal Communications Commission as a threat to US national security.

When European Commission President, Ursula von der Leyen emphasized finding “European solutions in the digital age” in a press release back in February, she probably wasn’t suggesting that Europe should copy the Chinese firewall.

And yet, a policy paper written by Hamburg-based consultancy, Future Candy, commissioned by the European Parliament Committee on Internal Market and Consumer Protection in the context of work on the Digital Services Act (DSA), has held it up as an example to follow.

As a long-term strategy to be implemented within the next decade, the company suggests a “European Internet: Similar to the Chinese Firewall”.

The study has no legal effect, but will be part of the negotiation process and could influence the debate when it comes to regulating digital services in the European Union.

When it comes to digital services, Europe lags behind the Asia and the US

The intention of the ‘European Internet’ would be to provide a boost to European countries by limiting the use of outside services. Europe is beginning to receive more VC investment — but it still lags far behind Asia and the United States. 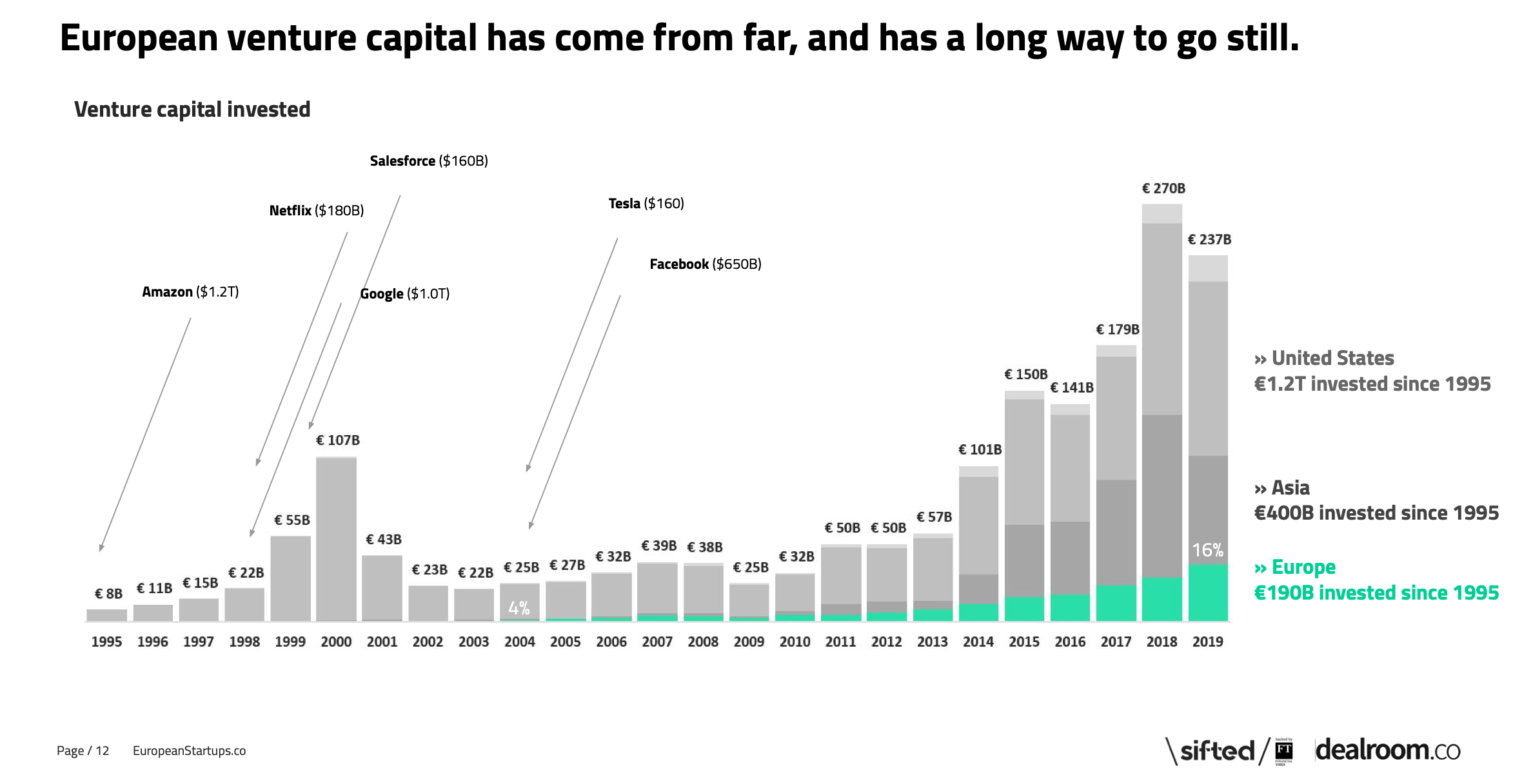 As it stands, European tech is also very dependent on Silicon Valley tech: 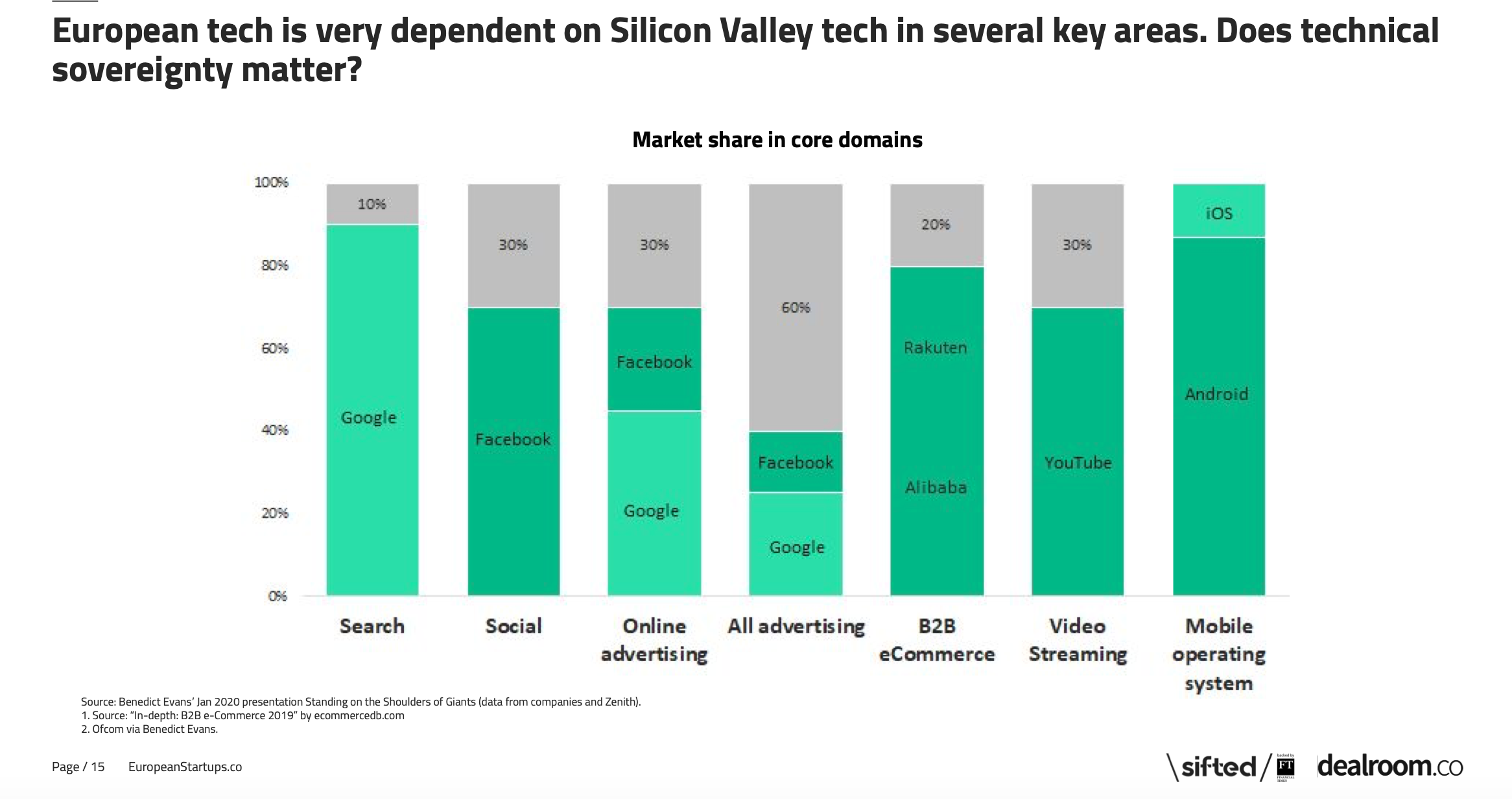 According to the policy paper, the purpose of the ‘European internet’ would be to “drive competition and set standards, similar to what has happened in China in the past 20 years”.

It states that, “like the Chinese firewall, this European internet would block off services that condone or support unlawful conduct from third-party countries”.

It’s not the first time such an idea has been suggested — a similar idea was suggested by the Hungarian Presidency back in 2011. The idea received a significant amount of criticism back then, just as it has now: 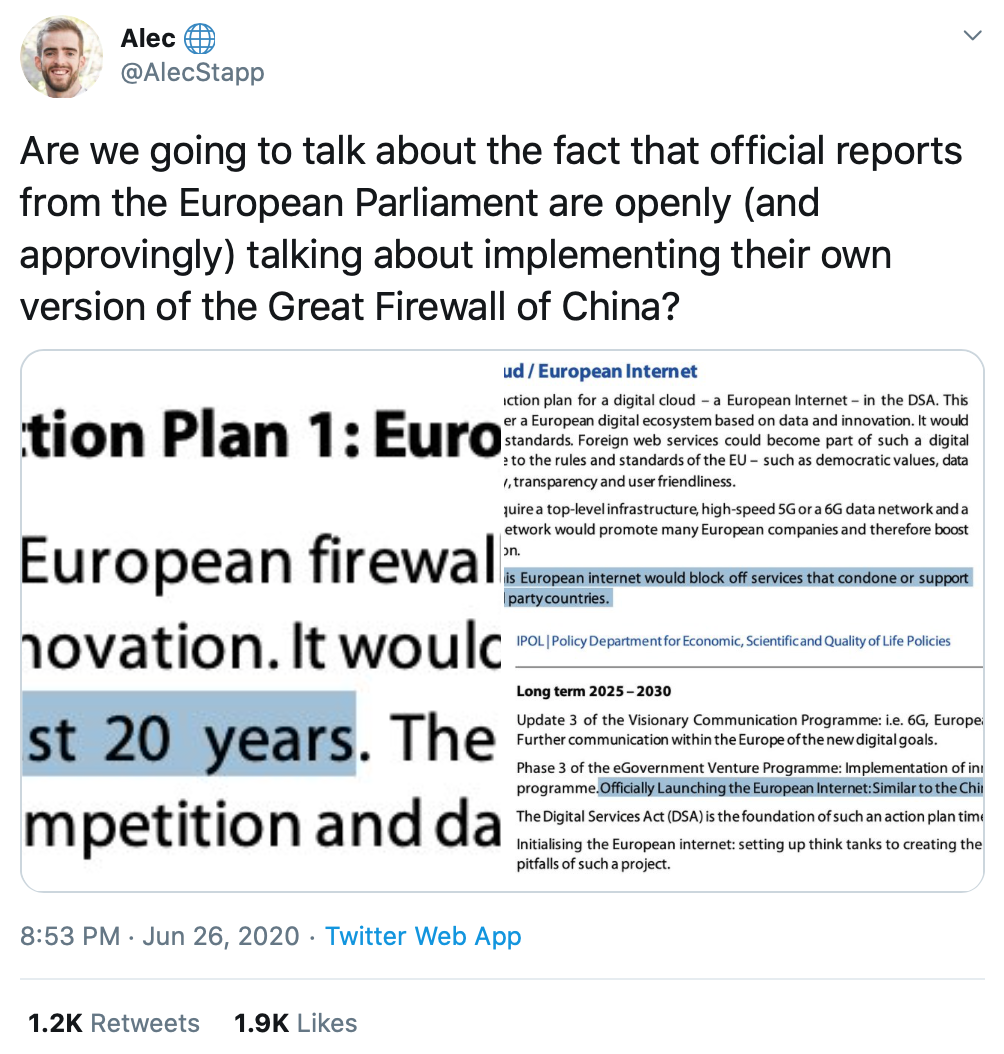 “In the introduction of the report we specifically say: we want to try to look into a future where technology is benign. Hence the aim was to be visionary and bold. I personally believe this is what is lacking in EU digital policy. Visionary thought and actions.”

The effectiveness of China’s firewall

China is infamous for its firewall that blocks outside tech including Zoom, WhatsApp, and Google Maps. It’s possible to get around this by using a Virtual Private Network (VPN), but amid the pandemic, China has reportedly been cracking down on VPNs in an attempt to “control the coronavirus message”.

As a policy movement, China’s firewall was strikingly effective. Had it not been in place, there’s a good chance that China never would have been able to compete with American companies.

“All in all, we predict a world that is partly digitized in all areas of life. Gaps in between services will close, creating a seamless digital world with many tasks being taken over by digital solutions, robots and the like. That being said, considerations about regulating these digital services, while not inhibiting innovation and standing in the way of progress, is the most important task. If this fails, Europe will soon be taken over by companies from the US or China.”

Locking out competition would be a great way to encourage people to use European tech.  But that doesn’t mean it’s a good idea. Even if such a ‘firewall’ were to be set up, it would be extremely difficult to create something that all European countries could agree on.

Isolation comes at a price

China’s firewall has been heavily criticized by governments and human rights groups within the European Union for denying Chinese citizens open access to the internet and preventing them from freely exchanging information.

“The biggest human rights issue with the Great Firewall is that it violates people’s right to the freedom of information and the freedom of expression,” says Yaqiui Wang, a China researcher at Human Rights Watch.

“The Chinese government also harasses, details and imprisons people who use internet circumvention tools to access blocked websites, as a result, violating people’s right to liberty and to fair trial. Many of these people are subjected to torture and ill-treatment when they are in detention, which is a violation of their human dignity.”

The paper in question entirely omits any mention of such risks. To make this explicitly clear that the dangers of taking such drastic measures had barely been considered, the beginning of the report states:

“The conceptual foundation for this report is benign and positive. We do not look too deeply into the risks and potentially dangerous scenarios, but rather attempt to understand the possible chances and opportunities.”

Deciding to be ‘visionary and bold’ is one thing. But suggesting a European firewall in an official EU policy paper and completely omitting risks isn’t ‘visionary’ — it’s dangerous.