When we released our CIA: Collect It All card game based on a declassified CIA training card game, we had included a fun little Easter egg in there, with help from Jon Callas, who helped create modern day encryption. So far, I believe a grand total of… two people have found it, solved it, and told me about it (though it’s possible many more have done so). That was neat, but we had nothing to give them beyond the satisfaction of having solved the puzzle. It seems that others have gone much, much farther with this idea.

Five years ago, Tarah Wheeler put together a big Kickstarter for the book Women in Tech, with advice/ideas/thoughts/stories from a variety of successful women in the tech field.

Five years after publishing that book, Wheeler has now revealed that she flooded the book with hidden puzzles, and while releasing the book itself was a massively difficult project, the fact that a bunch of people found and worked on the puzzles was part of what made it all worth it:

I hated this fucking book. I hated it while I was writing it. I didn’t think that would happen. But I did….

There was a secret in that book. It’s a secret that I’ve kept for half a decade, and while I’ve loved the wonderful messages and notes of support from people who’ve benefitted from this work, the puzzles I hid in it are the only unmitigated, unsoured, pure joy I’ve experienced in creating this Frankenstein’s Creature of a book.

Then some people noticed the codes and puzzles. A few people tried to solve them. Teams formed on Reddit and Twitter and Discord. And one small crew of four people finally journeyed to the end of the epic. And that’s how they won the secret buried treasure of pounds of precious silver.

The link above has some examples of the hidden puzzles, but here’s just one: 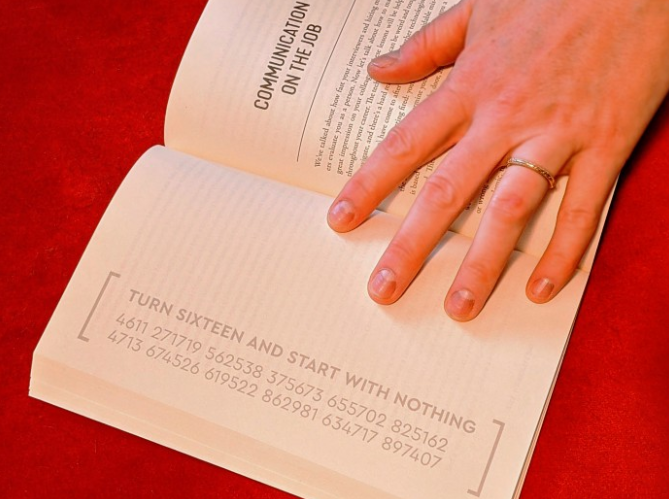 Tarah then worked with Jon Callas (a familiar name!) to create amazing cipher wheels out of silver. You can see the wheels demonstrated in a video that Tarah put up recently:

Even better, she put up details on how to make your own cipher wheels, including 3D printing files to make your own as well at Github. This is a very cool project that, along with everything else that’s fun about it, is a neat way to demonstrate how encryption works and why it’s so important.