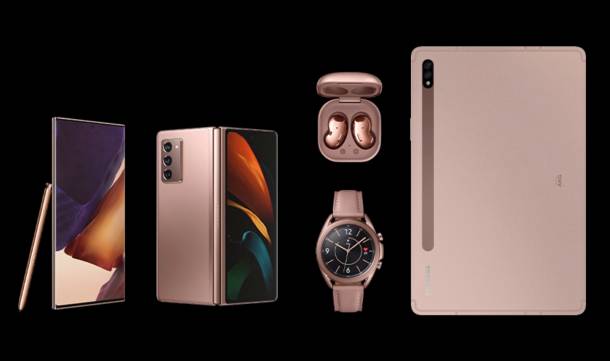 The second Samsung Unpacked press event of the year is finally here, but the novel coronavirus forced the Korean giant to do things differently this year. There was no crowd in attendance to awkwardly cheer at any of Samsung’s new announcements, as the entire event was virtual so it was just streamed on YouTube and social media. Samsung unveiled a variety of new devices during the show, including two Galaxy Note 20 phones, the Galaxy Z Fold 2 foldable, and new Galaxy Tab S7 tablets. Rounding out the list of new Samsung devices are two wearable devices, the Galaxy Buds Live earphone, and the Galaxy Watch 3 smartwatch.

Fans of the Note line have two new stylus-ready smartphones to check out, although it’s the Note 20 Ultra that’s the much better option of the two. Unlike the S20 phones, the new Note 20 phones have plenty that sets them apart. They do pack the same high-end Snapdragon 865 chipset along with a similar design and multi-lens camera. But the Ultra will feature more RAM and storage, including expandable storage, and it will offer better camera capabilities. Not to mention that the Galaxy Note 20 has a plastic back rather than the expected high-end glass. A new S Pen stylus is paired with each Note 20, and the stylus sits on the left side of the phone this time around.

If you’ve got even more money to spend on a brand new Samsung phone, the Galaxy Z Fold 2 awaits. The new foldable handset has a much better design than its predecessor, featuring a larger external display as well as a notch-less internal screen. It’s not just the notch that’s gone. The Z Fold 2 features a glass display that’s more rigid than last year’s fragile plastic screen. It’s still a foldable screen though, so you’ll want to handle it with care.

The phone will be available in September, priced at around $2,000.

Tablet buyers looking for an iPad Pro alternative running Android won’t find anything better than the new Galaxy Tab S7 series. The two tablets look a lot like iPad Pros, featuring thin metal frames with rounded corners and large screens with symmetrical bezels running around them. The Galaxy Tab S7 and Tab S7+ are both powered by the faster Snapdragon 865+ processor along with 8GB of RAM and 128GB of storage. They also support 45W fast charging. Add a dual-lens camera on the back, S Pen support, and keyboard accessories, and you end up with a premium Android tablet experience. Sadly, Samsung can’t replicate Apple’s iPadOS, as the tablet still runs Android.

The Galaxy Tab S7 starts at $650, while the Plus model will cost $850. The tablets will launch later this fall.

The brand new Galaxy Buds version is one of the more interesting products that debuted at this Unpacked event. The wireless earphones feature a novel design that’s unlike anything seen from competing products, AirPods Pro included. The Buds Live also offer replaceable tips and noise cancellation support, just like the AirPods Pro.

Preorder the Note 20 online and Samsung will throw in free or deeply discounted Buds Live earphones that will be available in a matching color. The Buds Live cost $169 if purchased separately.

The Galaxy Watch 3 will ship in two sizes, one with a 1.2-inch screen and a second model with a 1.4-inch display. They feature circular AMOLED screens protected by Corning Gorilla Glass. The smartwatches are made of stainless steel and bring back the rotating bezel, a feature that Samsung introduced a few years ago. These new wearables will run Wearable OS and pack a bunch of health sensors, including blood pressure and ECG just like Apple Watch Series 4 and Series 5 models.