How Can You Track The Productivity Of…

Summary: After an investigation by BuzzFeed uncovered several accounts trafficking in paid access to “decks” — Tweetdeck accounts from which buyers could mass-retweet their own tweets to make them go “viral” — Twitter acted to shut down the abusive accounts. 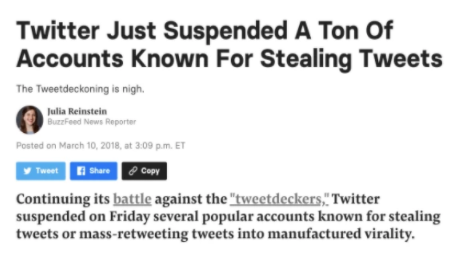 Most of the accounts were run by teens who leveraged the tools provided by Twitter-owned Tweetdeck to provide mass exposure to tweets for paying customers. Until Twitter acted, users who saw their tweets go viral under other users’ names tried to police the problem by naming paid accounts and putting them on blocklists.

Twitter’s Rules expressly forbid users from “artificially inflating account interactions”. But most accounts were apparently removed under Twitter’s anti-spam policy — one it beefed up after BuzzFeed published its investigation. The biggest change was the removal of the ability to simultaneously retweet tweets from several different accounts, rendering these “decks” built by “Tweetdeckers” mostly useless. Tweetdeckers responded by taking a manual approach to faux virality, sending direct messages requesting mutual retweets of posted content.

Unlike other corrective actions taken by Twitter in response to mass abuse, this cleanup process appears to have resulted in almost no collateral damage. Some users complained their follower counts had dropped, but this was likely the result of near-simultaneous moderation efforts targeting bot accounts.

Resolution: Twitter moved quickly to disable and delete accounts linked to the marketing of user engagement. It chose to use its anti-spam rules as justification for account removals, even though users were allegedly engaged in other violations of the terms of service. The buying and selling of Twitter followers — along with retweets and likes — continues to be a problem, but Twitter clearly has a toolset in place that is effective against the behavior seen here. Due to the reliance on spam rules, the alterations to Tweetdeck — a favorite of Twitter power users — appear to have done minimal damage to legitimate users who enjoy the advantages of this expanded product.