Eugene Volokh reports an Ohio court has hit a number of defendants in a libel lawsuit with an unconstitutional order forbidding them from posting the name of the man suing them. It’s no ordinary man, though. It’s a police officer who several attendees of a Cincinnati city council meeting have both identified and claimed used a racist hand sign while interacting with them.

A veteran Cincinnati police officer sued several citizens in early July, accusing them of defamation in a closely watched case that could be the beginning of a trend of police officers going after critics in court.

Several citizens accused the officer of possibly being associated with white supremacy or of being racist after spotting a video and picture of him allegedly flashing the “ok” sign at a City Council meeting in June – a meeting held to address concerns by those in the Black Lives Matter Movement.

They posted about it on Facebook and other online forums, leading the officer to file his lawsuit.

Nothing all that unusual about this. Someone with pretty thin skin was offended that other people said mean things about him and decided to sue about it. That the plaintiff is a police officer is a little different, but not unheard of. That the police officer talked a judge into allowing him to file pseudonymously and place his affidavit under seal is a bit stranger. From there, it just gets stranger and more unconstitutional

This is from Volokh:

I’ve also learned that the judge has issued a temporary restraining order—without any participation on the defendants’ part—ordering them not to “publiciz[e], through social media or other channels, Plaintiff’s personal identifying information.” The order doesn’t define “personal identifying information,” but the only Ohio statute that does define term (the identity fraud statute) defines it to include a person’s “name.”

This order [PDF] only targets future posts. That’s some prior restraint right there. And while the judge may have meant no one can publish anything like the cop’s home address or personal phone number, the lack of specificity allows it to be read as banning the use of the officer’s name.

Not that it’s all that difficult to figure out who this officer is. Multiple attendees (who are now defendants in this lawsuit) posted the officer’s name online and linked to what appears to be the officer’s Facebook account. Searching through the defendants’ social media profiles brings up the posts referring to the officer by name. 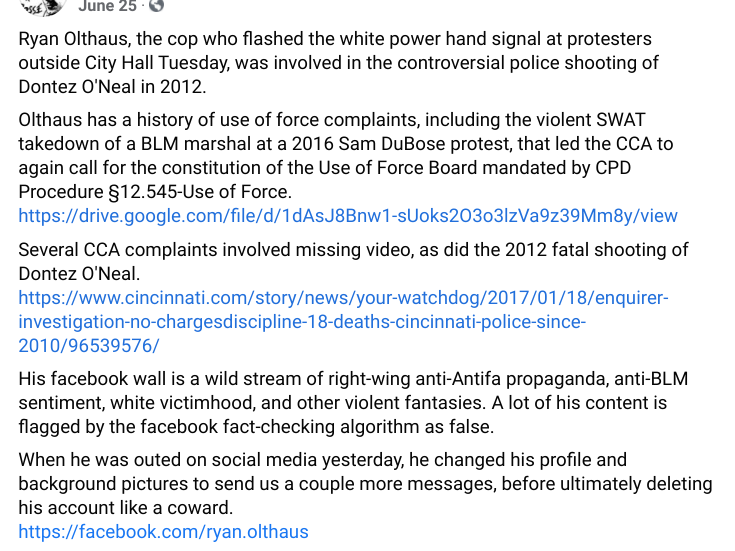 The officer’s Facebook page has had all of its posts deleted. The header image has been replaced with this, which appears to be a direct response to those accusing him of flashing the “ok” sign at the city council meeting. 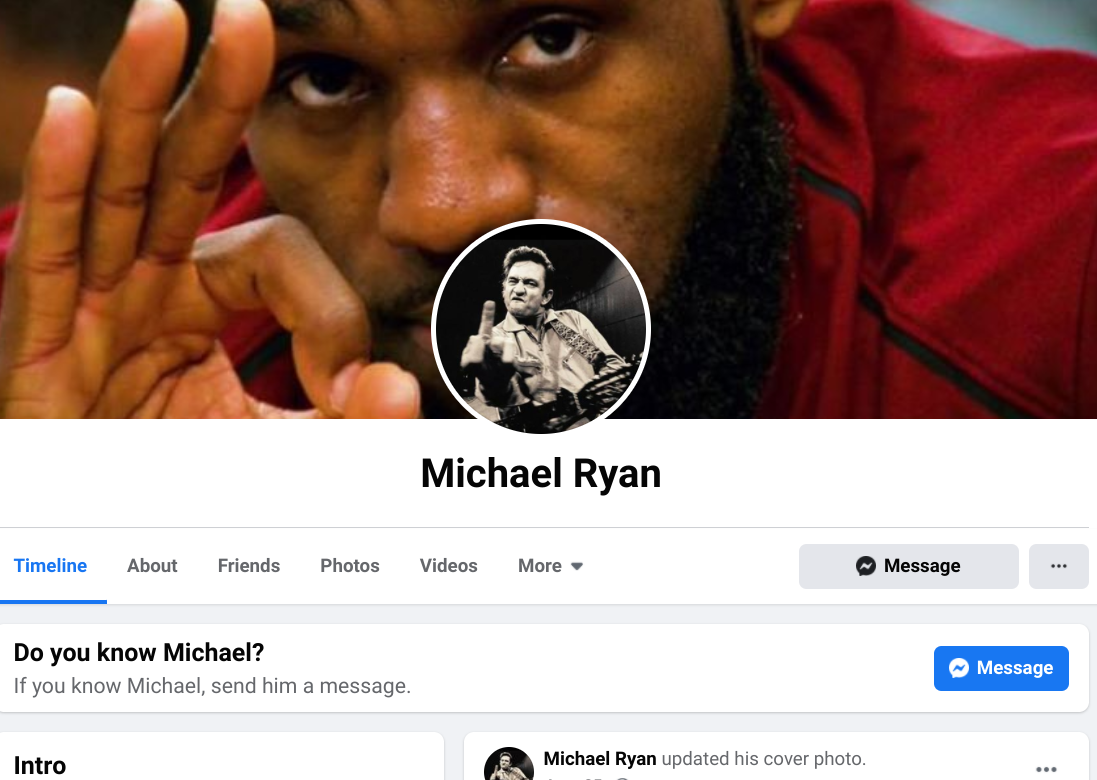 Officer Ryan Olthaus — who was involved in the controversial killing of Dontez O’Neal in 2012 — goes by the name “Michael Ryan” on his Facebook page. The pseudonym being used in the lawsuit against these social media users is “M.R.”

That all seems to add up to Officer Pseudonym. His lawyer seems to feel the current, possibly unconstitutional order doesn’t go far enough, though. The officer would also like to see the defendants forced to remove any previous posts about him. His attorney argues the posts are libelous because [checks filing] they were made by people who don’t like cops.

Defendants posted these statements on their social media platforms, accusing Plaintiff of being a white supremacist in a climate of severe hostility toward police officers. Further, at least one Defendant threatened to dox Plaintiff — to reveal his personal identifying information online — seemingly for sport. Other posts include, “Fuck SWAT,” “Fuck 12,” “ACAB”, “1312” and many similar statements evidencing the Defendants’ hatred and malice toward the police, including the Plaintiff.

The court hasn’t ruled that any of the posts being sued over are actually libelous. So, at this point, the officer has no legal basis to demand their removal. The officer has already been granted one broad restriction on the posting of his personal information (which includes his name) by the suit’s defendants. Now, he wants to go even further. And he wants to do it while keeping his name from being tied to his dubious litigation.

Eugene Volokh (along with the Cincinnati Enquirer) are asking the judge to unseal the documents. And hopefully the defendants will challenge the restraining order and make the court rethink (or perhaps consider thoughtfully for the first time) its blanket ban on publishing this officer’s personal information.

Amazon Spark, the retailer’s two-year-old Instagram competitor, has shut down