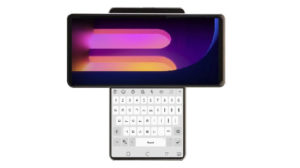 LG has confirmed that its upcoming swivelling smartphone is called the ‘Wing,’ and will be unveiled at a virtual event on September 14th.

The device reportedly has two screens that rotate into a ‘T’ shape with a sliding mechanism, as seen in a recent teaser video released by LG.

“LG confirms LG WING will be the first product to be launched under the Explorer Project, LG’s new mobile category aimed at discovering new ways to interact with mobile devices, focusing on the evolving and ever-changing needs of today’s consumers and challenging established user norms,” the tech giant wrote in a press release.

“LG’s boldest, newest smartphone will deliver a new and different form factor and mobile experience that would be impossible to create with conventional smartphones.”

The smartphone is rumoured to feature a 6.8-inch main screen, and a 4-inch second display with either a Snapdragon 765 or 765G processor. It’s also expected to support 5G and have a triple-rear camera array.

According to a report, the device could cost 1.9 million won (about $2,106 CAD), which makes it quite a pricey handset.