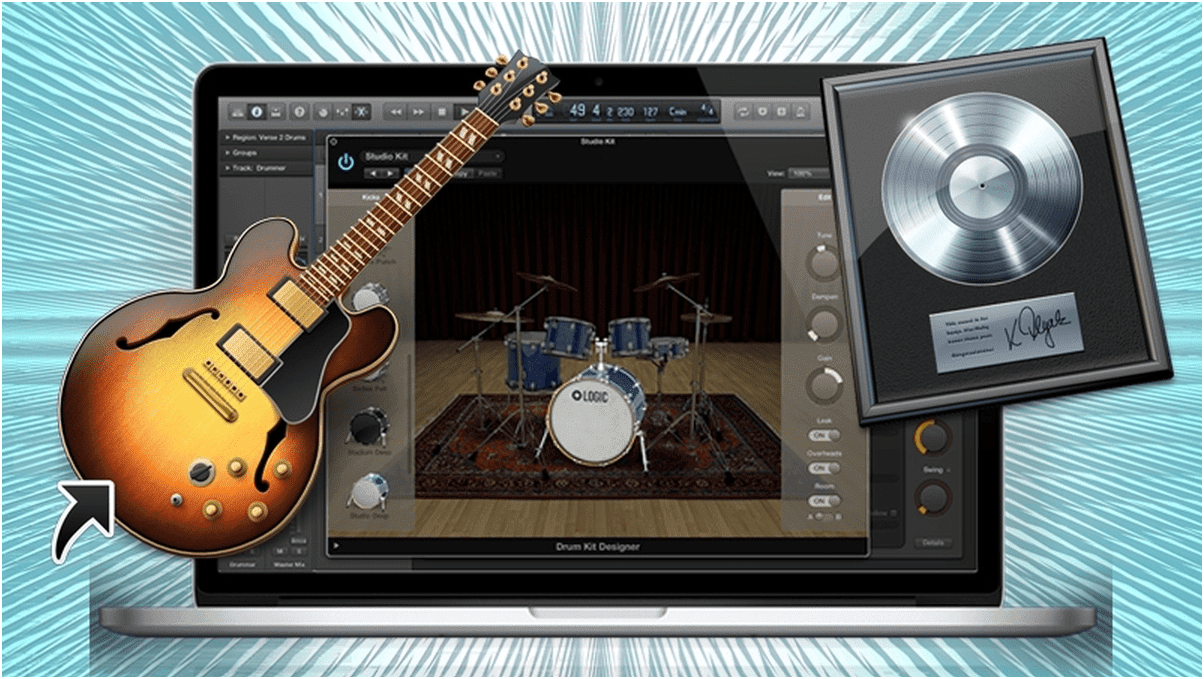 A world without music is unthinkable all the better that it doesn’t take a lot of effort to work professionally with music and audio programs such as Logic Pro and GarageBand on the Mac. But which program is most suitable for you? We take a closer look at both applications.

If you’ve ever wanted to dive into the fascinating world of audio production, then you’ve come to the right place with a Mac. Every new Mac has a GarageBand preinstalled on the system, making it ideal for beginners many ways to start editing music and audio.

But thanks to the numerous setting options, even more experienced producers can make friends with GarageBand. An important argument for working with GarageBand: The software is also free for iOS devices and works with the desktop version.

This way, ideas can be quickly sketched on the iPhone or iPad while on the move and easily imported to the Mac. Or you can add additional tracks to a project, such as everyday noises or acoustic instruments in places with special sonic requirements.

Before you set up your Mac and suitable microphones there, you can do that iPhone can be used quickly and conveniently as a recording device and mixer. Of course, Apple also has a program for music editing on the professional level in stock: Logic Pro X. For 230 euros, users can download the software from the App Store onto their Mac – and compared to other programs, this price is even more than attractive.

Comparable competing products, such as Cubase, cost around 500 euros and Pro Tools 11 costs a lot more. But if GarageBand is that good, why should you upgrade to Logic in the first place? Well, it all depends on what you’re doing with the audio editing.

We will introduce you to the differences between these two programs and show you which program is best for you. With the latest version Logic Pro X 10.3, Apple has also improved the cooperation between Mac and iPhone iPad, which we also take into account in our analysis.

As in GarageBand, you can create a mixdown for your project in Logic, export it for the iOS device and then bring the tracks recorded there back into the original piece.

Logic Pro X vs GarageBand: What’s In The Box? 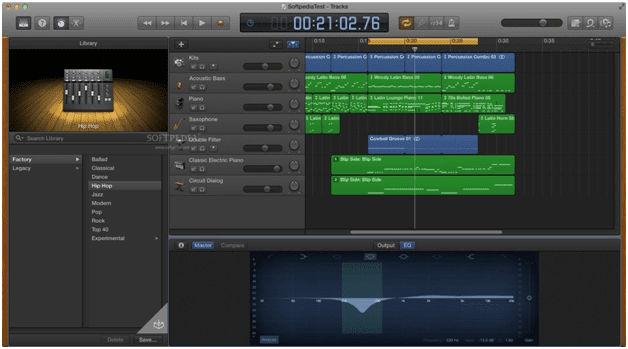 Of course, the Logic Pro X, which costs around 200 euros, includes more functions than the free GarageBand. However, Apple has upgraded GarageBand with some features from Logic Pro X in the last few updates. The differences between the two programs remain huge.

GarageBand is basically a simple version of its big brother that allows you to record instruments and vocals on your Mac. Depending on the application, you need a microphone, midi keyboard or mixer to receive an optimal audio signal in GarageBand or Logic Pro X. With adapters like those of the iRig series, guitars and basses can be easily connected to the Mac (and also to iOS devices).

Alternatively, the keyboard on your Mac can be used as a MIDI controller, or you can download the free Logic Remote app for the iPad and turn the tablet into a controller so you can play virtual instruments on it. At GarageBand you have access to 50 different keyboards, drums and guitar models.

The extensive library with loops, software instruments and virtual drummers covers several gigabytes and is not included in the basic version of the program in order not to use up unnecessary storage space. But if you want, you can reload this library this “in-app purchase” is now also free. Said loops are audio clips that come from different music genres and can be integrated into your own music.

In addition, these sounds can be used completely free because there is no copyright on them. So if you use some of the loops commercially or land a mega-hit with them, you don’t need to worry about a visit from the Apple lawyer 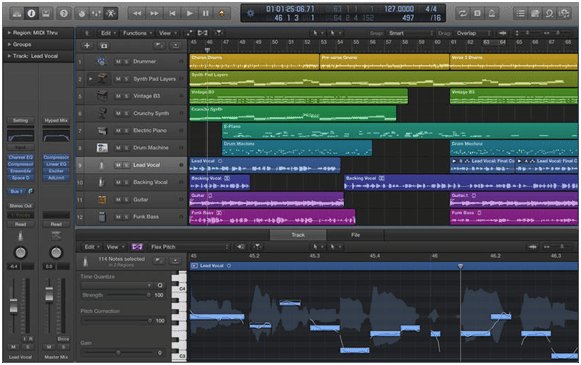 Compared to GarageBand, Logic Pro X has a few more instruments and loops available. Around 20,000 loops are downloaded via an optional, free, 35GB download. Many of these loops belong to specific sets, such as the 70s electric piano, so that different patterns can be created. If you want to use these software on PC, here are the steps on how to download logic pro x for windows.

Logic Pro therefore offers a much larger selection of different loops, with GarageBand you have to accept a reduced selection. The format of the software instruments and loops is the same for GarageBand and Logic Pro X, but the same format that you have integrated into your project in GarageBand can also be used in Logic Pro X later.

Logic Pro X also provides a number of impressive tools for creating sounds, such as Space Designer, Ultrabeat Drum Synthesizer and the EXS24 sampler, which are not part of GarageBand. Perhaps the most unusual of these tools is called Sculpture, which Apple claims can create the sound of vibrating materials such as wood, glass, nylon or metal, making very special sound creations possible.

Also included is a sheet music feature, which automatically enters the music played in the staves so that musicians can follow what they have heard on the digital music paper. A feature that both programs have meanwhile integrated is called the drummer. A “live” drummer track is created on the screen in just a few clicks.

The advantage here: Instead of having to play the rhythm yourself, you use the services of a virtual drummer. The volume and complexity of the rhythms can be adjusted with sliders, as can different music genres. The user can choose from different drummers, each with their own style. This feature helps to get a certain basic rhythm given.

The virtual drummer can be assigned a track, the rhythm of which he has to follow. Perhaps you have succeeded in creating a particularly tricky bass line whose syncopation should be used by the drummer – please! Since spring 2017 there are three virtual percussionists in GarageBand and Logic who contribute congas, bongos, rattles and other sounds in Latin, songwriter or pop style. GarageBand knows the limitation that only two tracks with virtual drummers can be added to the project.

If you like, you can also choose from the numerous drum kits from the media library and set the rhythm yourself. You can play this using a USB keyboard or using the virtual music keyboard with the Mac keyboard.

Users of the MacBook Pro (from autumn 2016) have an advantage here as long as they have a touch bar, because the symbols of the instruments that are used can be seen on the OLED bar. Otherwise, you always have to remember which (piano) key makes the bass drum thump and which makes the hi-hat hiss.

Guitarists can work in both GarageBand and Logic Pro, as up to 25 different guitar and bass amps and 35 different effect pedals can be found in both programs. These all sound great and are easy to use and adjust thanks to the graphical setting.

The virtual amplifiers are optically based on their analog models. However, unlike IK Multimedia with its Amplitube program, Apple has neither acquired nor had to purchase any licenses from manufacturers. The curved lettering of a British blacksmith’s shop can also be recognized when it says “GarageBand” and not “Marshall”.

A feature that can only be found at GarageBand is called “Learn to Play” and – as the name suggests – shows you the first steps on the piano and guitar in an interactive way.

There are even tutorials in which stars like Sting or Norah Jones show beginners how some of their songs are played on guitar or piano. However, there are far more suitable providers for learning the basics on the keyboard or fingerboard.

GarageBand and Logic Pro only differ visually at second glance, because both the way they work and the look are very similar in both programs. Of course, Apple deliberately chose these parallels to make it easier for beginners to switch to Logic from GarageBand.

But even behind the scenes, the two programs share something in common, namely the codebase. This enables users to continue working on projects in the other program, regardless of whether they were created in GarageBand or Logic. The layout of the work area is clean, smart, tidy (typically Apple) and thus makes the work process very pleasant.

The user can use the menu bar to show and hide the library, information, dynamic help and a toolbar and thus customize his work area. The individual tracks can also be adjusted separately by assigning each track its own color.

This makes it easier to keep track of instrument groups. Both programs are designed as one-window programs. This can sometimes mean that you lose track of some windows because they overlap. If you work with several screens, you can display various Logic applications on them. 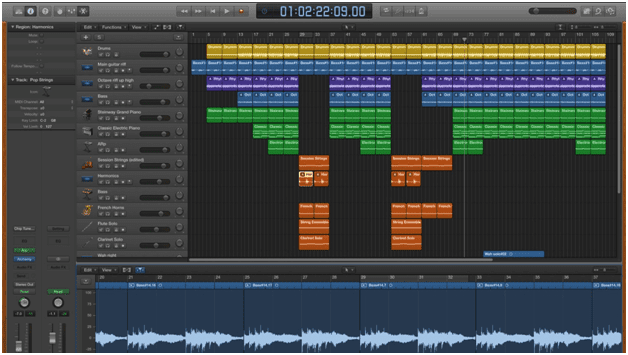 At first glance, Logic and GarageBand are very similar and seem quite simple and plain. If you want more complexity, you have to take a look at the settings, because most of them are deactivated from the start. Settings for surround, MIDI, control surfaces, notation and advanced editing can be activated via Advanced Tools.

The basic functions from GarageBand are of course also included in Logic Pro, but the Logic users can access many more tools and thus work much more efficiently. Cutting audio tracks can be a real pain in GarageBand. In Logic Pro X, the cutting process is much more intuitive, as the scissors tool and marker can select the individual areas much more precisely than is possible in GarageBand.

Just one example of the greater flexibility of Logic Pro X: In GarageBand you are tied to the key and time signature that you initially selected for the entire project; in Logic Pro X you can adjust key, tempo and time from section to section.