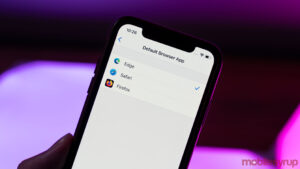 iOS 14 and iPadOS 14 introduced a feature to let users change their default browser app and email app. Out of the box, iPhone’s use Safari and Apple Mail by default, and while those apps are fine, there are many reasons people want to use other options.

For example, many people use Google Chrome on their computer and would like to use the same browser on their phone. Now, you can set iOS to use Chrome by default, instead of having to contend with Safari against your will.

It’s also worth noting an issue with the current implementation of default apps causes iOS to reset the setting when you reboot your device.

With the new feature, we thought it’d be helpful to compile a list of which browsers and email apps support iOS 14’s default app option, and which don’t. Since there is a wide variety of browser and email apps available for iOS, we’ll focus on the well-known options.

The following browsers can be set as the default browser app on iOS 14:

Unfortunately, there are a few notable missing browsers from the list. For one, the iOS version of Brave isn’t an option, although The Verge notes that the browser is currently going through Apple’s review process. Firefox Focus, Opera Touch, Dolphin and Ghostery don’t support the feature either, but we’ll keep an eye out if any of these gain support in the future.

To set a browser as your default, open the Settings app and scroll to the browser of choice. Tap it, then tap ‘Default Browser App’ and select the browser you wish to use.

The following email apps can be set as the default on iOS 14:

Some notable missing email apps include Gmail, Yahoo Mail, Polymail and Edison Mail. I’m sure we’ll see many of these roll out support for iOS 14’s default email app setting in the coming weeks.

To set an email app as your default, open the Settings app and scroll to the email app of choice. Tap it, then tap ‘Default Mail App’ and select the option you wish to use.

Funniest/Most Insightful Comments Of The Week At Techdirt

What Learning to Fly Can Teach Us About Transforming Education