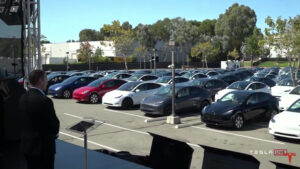 Tesla held its annual shareholder meeting today at its Fremont factory outdoors in front of a crowd of people sitting in their Tesla cars.

Got my Tesla #2 seat in the Battery Day & Shareholder Meeting pic.twitter.com/fQ3D7SndmC

While I’ll admit that the shareholder meeting section of the company’s battery day presentation isn’t the most riveting thing to watch, it is interesting to see how the company handed the meeting amid the COVID-19 pandemic.

When Tesla CEO Elon Musk came out the crowd even honked for him, and they responded with even more honks once he started talking to them. It was an interesting situation.

Hopefully, the news will unfold as the event goes on, but for now, we can all chuckle at the thought of all future events being held drive-in style.

The post Tesla holds shareholder meeting in front of crowd of people in Teslas appeared first on MobileSyrup.