Company leaders know they need to implement artificial intelligence and machine learning technologies within their businesses to stay ahead of the competition. But studies show that most organizations aren’t yet seeing an impact from AI investments and are increasingly wary of potential risks related to the burgeoning tech.

The Seattle startup came out of stealth mode this week, unveiling its AI data monitoring platform that has attracted investor interest from top investment firms. Madrona Venture Group, Defy Partners, Bezos Expeditions — the VC arm of Amazon CEO Jeff Bezos — and Ascend VC participated in a $4 million round for the company, which is the latest to spin out of Seattle’s Allen Institute for Artificial Intelligence (AI2).

WhyLabs is led by CEO Alessya Visnjic, a University of Washington grad who spent eight years at Amazon helping the tech giant develop its machine learning infrastructure. That’s where she met her co-founders: Andy Dang, another former Amazon machine learning engineer, and Sam Gracie, a 7-year Amazon vet who was most recently a principal UX designer with the machine learning group.

They are joined by Maria Karaivanova, a former Cloudflare executive who spent the past three-and-a-half years as a principal at Madrona. She helped lead the firm’s investment in WhyLabs and ultimately decided to join the founding team.

“I just see so many parallels between the pain points we solved for web administrators at Cloudflare, and the tools WhyLabs is trying to put in the hands of AI builders,” said Karaivanova. “I could not say no to this opportunity and this team.” 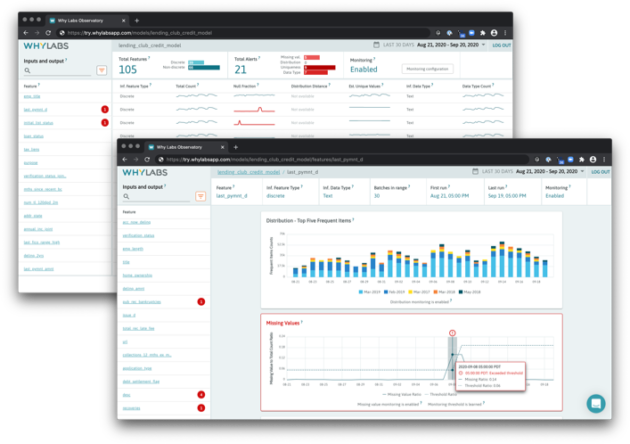 Machine learning models can break, especially when deployed at scale. It can be difficult to figure out the cause of failures and which data inputs need attention.

That’s the problem Visnjic helped Amazon address with its internal tools. Now she wants to bring that ability to any company.

“I left Amazon with a vision to enable every enterprise to operate AI reliably,” said Visnjic, who departed Amazon in 2017.

The CEO spent time at various groups within the Seattle startup ecosystem, including Madrona Venture Labs, the startup studio within Madrona Venture Group, and the UW’s business school, where she earned a degree in entrepreneurship. She eventually landed as an entrepreneur-in-residence at AI2, the organization created by late Microsoft co-founder Paul Allen in 2014.

Visnjic also started Rsqrd, a community of AI builders. That helped her get exposure to the most pressing pain points for AI engineers were facing, and ultimately crystallized the idea for WhyLabs.

The startup sells software that aims to prevent and diagnose in real time what Visnjic describes as “model meltdowns.” It offers an open-source library that integrates with various on-premise or cloud infrastructure services and monitors activity. The platform then uses complex statistical methods to spot any anomalies and alert engineers.

AI data models can break in ways that are much different than traditional software, Visnjic said, requiring a new way to address failures as they come up.

“We need tools that can create gates and control levers to ensure that when something outside of the desired behavior scenarios occurs, there is a way to notice it and prevent it from affecting the customer experience,” she said.

Visnjic said Why Labs is similar to Datadog, the publicly-traded cloud software monitoring company, but with a focus on back-end machine learning and AI processes.

A study last year from MIT and Boston Consulting Group found that while nine of ten executives agree that AI represents a business opportunity for their company, less than half say they have seen increased revenue from implementing the tech.

“Companies have to seriously integrate AI into their core business strategy and their core business processes,” said the study’s co-author Shervin Khodabandeh. “This is often much harder than the AI tech itself, and getting it right requires a new way of working that is different than typical tech programs.”

“Machine learning operations is its own software category, and we are defining the monitoring and observability sector of the ecosystem,” the CEO said.

“Today’s AI systems make weighty decisions regarding loans, security assessments, medical diagnoses, and more. Ensuring that these systems are transparent and auditable is critical,” he said in a statement. “WhyLabs is building the essential missing piece of the AI tooling ecosystem that will help enterprises use this technology responsibly.”

AI2 raised $10 million this past January for a seed fund and incubator that fosters new AI-oriented startups on the frontiers of deep learning, computer vision and natural language processing. The program has already been able to hatch a brood of successful AI-centric spin-outs, starting with Kitt.ai (acquired by Baidu in 2017) and continuing with the likes of Xnor.ai (acquired by Apple in January), Lexion, Blue Canoe, WellSaid Labs, and Panda AI.

How to Create WordPress Multi-Page Form

How BEC attacks have adapted to the pandemic [Q&A]