Computer chip designer Arm Ltd. is looking to bring the speed and versatility of cloud-native software development to the automotive industry with the launch of its newest software architecture and reference implementation for future application design.

Arm’s Scalable Open Architecture for Embedded Edge or SOAFEE was announced today alongside two new reference hardware platforms for developers to design and test automotive applications that can run in the cloud and at the edge.

In a press briefing, Chet Babla, vice president of automotive at Arm, explained that vehicle architectures are becoming increasingly more complex as automakers look to deliver features such as advanced driver systems, infotainment systems and autonomy. These next-generation features can only be built atop of a more centralized cloud-native and software-defined computing architecture, he said, and require a standardized framework that can run at scale with real-time capabilities.

“Software-defined is transforming industries and it’s being accelerated by the cloud,” Babla said. “We’re leading a collaborative effort that is delivering the standards, software, developer resources and specialized processing platforms designed for the safety and real-time needs of automotive applications.”

The SOAFEE reference implementation has been designed by a special interest group of automotive and computing technology leaders including Volkswagen AG and Amazon Web Services Inc. Arm said it’s a free and open-source platform that’s designed to enable companies to prototype, test, explore and develop new automotive applications, available to download on GitHub now. Some of SOAFEE’s key features include container orchestration and automotive safety and functionality in real time.

“It’s an industry initiative to extend the cloud-native software experience to automotive workloads,” said Robert Day, director of automotive partnerships at Arm. [It enables] cloud-native technologies such as orchestrators, containers and CI/CD to be applied to automotive.”

“The truth is that cars are becoming software platforms, and software platforms today are based in the cloud,” he said. “So vendors are competing to become the reference architecture of choice for the new automotive cloud platform, and Arm has launched its proposal with SOAFEE.”

Analyst Patrick Moorhead of Moor Insights & Strategy told SiliconANGLE the SOAFEE initiative is similar to what Arm did for data center servers, providing more consistency across vendor implementations so customers don’t have to recreate workloads for each different platform they come across.

“In this case for the automotive sector, it’s going a step further by providing consistency around containers, orchestrators and CI/CD,” Moorhead said. “I don’t think any of this differentiates Tier 1s or automakers, so I think it’s a good idea.” 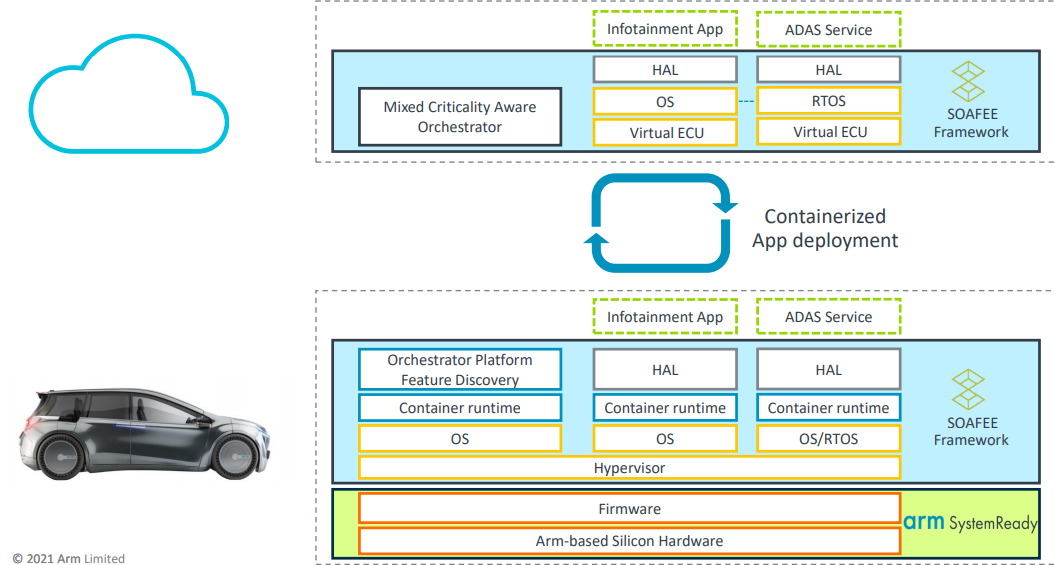 Both of the platforms are powered by Arm’s Neoverse-based Ampere Altra system-on-chip. They can be pre-ordered now and will be available in the fourth quarter, Arm said.

“The software-defined car is coming much sooner than anticipated and the infrastructure needed for this is being developed right now, however the industry faces some macro challenges,” said Riclef Schmidt-Clausen, senior vice president and head of intelligent cockpit and body at CARIAD, a Volkswagen Group company. “These include enabling software portability across a wide range of hardware platforms and building the cloud-native software infrastructure to ensure seamless deployment of applications developed in the cloud to a heterogeneous edge platform.”

Arm said the SOAFEE software architecture also has the potential to expand software-defined functionality to use cases such as robotics, medicines, manufacturing and logistics.

With reporting from Robert Hof

We are holding our third cloud startup showcase on Sept. 22. Click here to join the free and open Startup Showcase event.

We really want to hear from you, and we’re looking forward to seeing you at the event and in theCUBE Club.